“In the European colonies, indigenous populations had no rights. This is a central point because this reﬂects the attitude of Europe today”

In an interview with Gustavo Gozzi, professor of the History of Political Doctrines and ’Professor Alma Mater’ at the University of Bologna, he explains how understanding the continuity of colonial legacy helps ﬁnding a cause and possible solution to two of the biggest challenges that Europe are now facing: the migration issue and the raise of xenophobic political parties.

“If we give less rights to migrants this quickly transforms into an anthropological diversity. This would be the same as saying ’they are lower than us’. And so the legal inequality turns into an anthropological inequality”, says Gustavo Gozzi, Vice President of the School for Political Sciences at the University of Bologna. In an interview that took place in Bologna early in December 2017, the researcher and author explains how the European colonial past has a legacy and continuity in the actuality, that needs to be revised. Starting with the fact that “in the European colonies indigenous populations had no rights. This is a central point that reﬂects the attitude of Europe today”, afﬁrms Gozzi.
By looking back it would be possible to ﬁnd maybe the cause and eventual a solution to two of the biggest challenges that Europe are now facing: the migration issue and the rise of xenophobic parties. 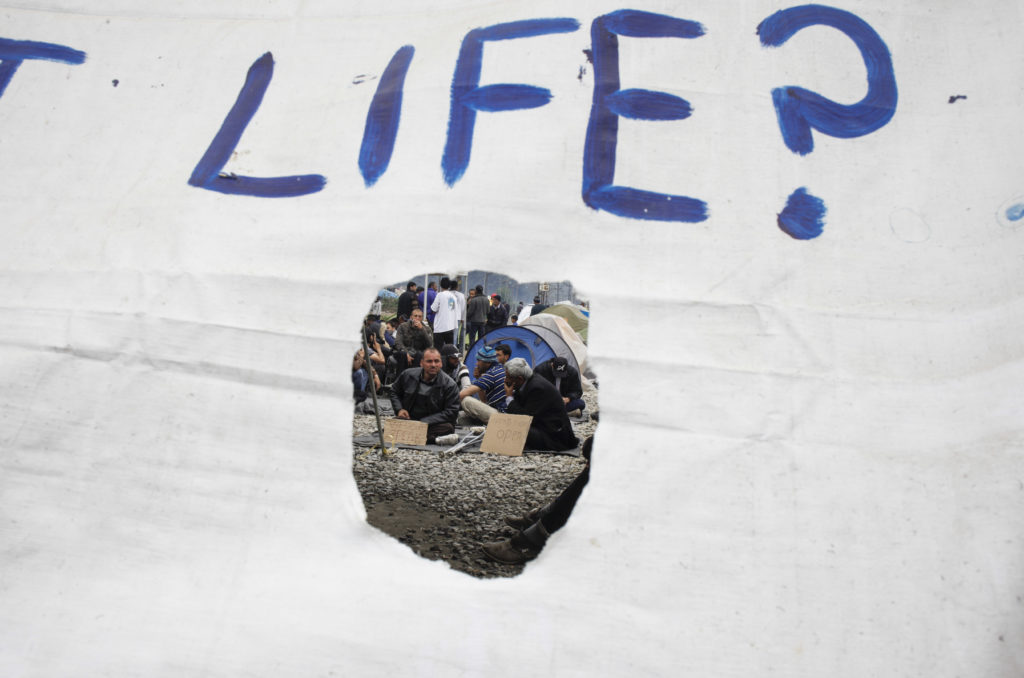 ‘Refugees at Idomeni, Greek border with Macedonia’ by Bruno Tigano

Does Europe have a moral responsibility towards Africa because of its colonial past?
Yes, I believe it does. We must look at how colonialism was conceived to understand if its legacy has been prolonged within Europe after decolonization. I believe that this continuity exists.
In the European colonies indigenous populations had no rights. This is a central point that reﬂects the attitude of Europe today.
Europe is the continent that gave birth to the Declaration of the Rights of Man and the Citizen (France, 1789), and later the Declaration of Human Rights (1948) and yet, it denied those rights in its colonies.
There was the idea that people in Africa were behind European development and that through the civilizing mission of Europe these people – subject to colonial rule – would become like Europeans. There were different forms of colonialism. The French focused on assimilation, which meant to deny the culture of origin of the indigenous population, to deny what we call cultural rights.

The civilizing mission of Europe in Africa that you mentioned, also had an economic aspect in colonial time?
It was claimed that Africa was behind in the age of agriculture, while Europe was in the industrial development. European countries posed the question how should Africa be developed ? And the answer was not to be developed industrially because it would compete with the European industries. Africa was maintained in that agricultural stage because it was functional to Europe.
As we know, Europe was constituted as a common market, the European Economic Community (ECC), in 1957. At that time France and Belgium were still in possession of their colonies, even if some were protectorates like Morocco or Tunisia that became independent in 1956.
France and Belgium brought their colonies to the EEC. These colonies were intended to be used as collective resources for the founding members of the EEC; to maintain colonial rule through a new version of colonial dominion.

When you say that after the foundation of the European Economic Community in 1957, a new version of colonial dominion appeared, what do you mean by that?
When in 1963, 18 African countries became independent, they were associated with the European Economic Community and a form of dependence on Europe was maintained in every way – above all for France.
Through the Convention of Yaoundé in 1963, the former European colonies continued under the European control, under what was supposed to be the development of those countries, only that this development had to be in accordance with the European market. This continued with the Lomé Convention in 1975 and then in the later Cotonou Agreement (from year 2000) that will last until 2020.

Is this the legacy of the colonial time that is still present today?
Looking closely at this path we can see a continuity between the age of colonialism and the age of post-colonialism. These African countries are considered as suppliers of raw materials and as a market for European products.

Would you say that European politicians of today are aware of this colonial legacy? Who would be in charge of raising the awareness about this historical responsibility?
It should be up to the European governments to make a critical review of the colonial past. But they don’t do that. Why? For instance, France fails to establish normal diplomatic relations with Algeria because it does not accept its responsibility there. The history books in France continue to present colonialism in Algeria as a civilizing mission. The reality is that there was a brutal exploitation policy.

How can Europe start taking responsibility for its colonial past? Is this something that should be taught at schools?
Yes, history lessons at schools should make this colonial past known. But not only this. For example, there was a famous movie, Lion of the Desert, that showed the faults of Italians in Libya -a famous ﬁlm, with Anthony Quinn playing the main character. However, in Italy this ﬁlm never circulated, because it showed the resistance of Libyans against the Italians.
King Leopold II of Belgium, for example, a real war criminal, who committed crimes against humanity – corporal mutilations and other terrifying things that the Belgians did in the Congo. There have been some marginal movements ﬁghting to take down the statues of King Leopold. These statues should be removed.
History should be rewritten. Historiography should be used to make a country understand its responsibility.

How does this existing colonial legacy play a role in the actual migration crisis?
Europe has started to understand that when talking about migration it has to look at the causes of it. So, it has launched new development programs for Africa. In these days a so-called Marshall plan has been launched, which makes use of a collaboration with private companies.
The past has illustrated to us, however, that European intervention has not been in favor of Africa. And therefore the migratory ﬂows are a consequence of the lack of development that Europe has not favored in any way.

Do you think that if Europe was to take responsibility of its colonial past, it would make a difference when handling the migration crisis?
Colonialism was over in the 1960s. More than 50 years have passed, not long enough to reach a maturity that would allow for a change of the interpretation of this history.
But certainly it is clear, that this is the path to follow: the admission of responsibility. Europe has not yet made this journey.
If Europe would be able to make a revision of its own colonial past, this would surely change the attitude towards migrants. Absolutely.

The migration problem has an emotional aspect – as it is about human lives – and also a bureaucratic, police–making aspect fundamental to solving the situation of migrants. Could you comment on the way Europe is handling this second part?
Europe does not have a European policy towards migration but a plurality of policies that are different according to the different stories of the European countries.
The EU has launched a series of programs, such as the Global Approach to Migration and Mobility (GAMM) to encourage legal migration. Then it also launched a program to ﬁght against the trafﬁcking of human beings. A political asylum package was launched by the European Parliament in 2013. But it did not eventuate.

Since the migration crisis in 2015, the discussions are also around integration. How can integration function so that it also guarantees the protection of the identity of origin of the migrants?
An equilibrium must be found between a 1) cultural-ethical integration, which means respect for the cultural identity, language, and religion of migrants – also recognizing food habits in nurseries for those who do not eat meat; recognition of clothing habits – and what is called 2) political-constitutional integration, that is the acceptance of the constitution’s values of the country of arrival. In Italy, cultural identity is respected but not certain practices that our constitution does not accept – like the mutilation of genitals practiced in some African communities – because that is a violation of the dignity of the person according to our constitution.
But it is not only what is launched by law, but what must be built through the fact of living together in a community. The reception is not sufﬁcient. It’s not enough to say I’ll give you a home, I’ll give you a job, there must be a mentality that recognizes the equal dignity of the migrant.

Having to speak a new language, isn’t that a form of assimilation, as in the French colonial model?
Learning the language of the country of arrival is a condition for integration, for being able to take part in the social fabric.
At the same time, learning the language of origin must be safeguarded. The protection of cultural identity should involve the establishment of language courses for children of second-generation migrants. Germany did it.
The theme of integration is difﬁcult because of the different models and constitutional realities and the fear about cultural identity or taking away work. From a cultural point of view, it has always been argued that progress depends on the comparison with diversity because diversity represents an element of innovation. And about the labor market, studies related to welfare have shown that the presence of migrants contributes to well-being because they pay contributions to the state and help maintain the level of well-being.

Guaranteeing rights to migrants are fundamental for integration.
Why are rights important? Because they demonstrate a parity. If we give fewer rights to migrants, this quickly transforms into an anthropological diversity.
If you deny the citizenship to those born here, it you pay migrants less money, all this is saying that you consider migrants less than local citizens and so the legal inequality turns into an anthropological inequality.

You mentioned that integration is not only about what is enacted by law but about building a mentality that recognizes the dignity of the migrant. How is it possible to build that mentality?
Building this mentality is very difﬁcult because Europe has not dealt with its own colonial past. If Europe does that it would have to admit responsibilities. And Europe does not want that, or it is not ready. It is a reﬂection that costs, because this would bring about a change of policy.

Do you mean economic, political and moral costs?
Economically it would beneﬁt Europe to recognize the value of migrants as part of the economic growth of a country. If you give a good salary, give a house. There is an advantage of an entire society to give people equal rights.

But then more people would like to migrate to Europe?
If Europe had a common migration policy, the migratory problem would not exist. With the richness we have in Europe we would be able to face the problem of migration. But not in terms of charity, but in the form of an integration that would favor a common growth. Unfortunately this is not understood.
In Poland there has been in October 2017 a manifestation with more than one million people kneeling with the cruciﬁx in hand on the Eastern borders of Poland against the Muslim threat that does not exist. A collective delirium. This is very serious; it tells how people have a false representation of the other.
Only that the other does not exist. We don’t know the other because we ﬁlter it through our representation. The other is our creation. This discussion is a very complex discussion. A discussion that has an economic and above all a cultural aspect.