The untold story of Eurafrica

Europe’s colonial past and its influence in the actual refugee crisis
The book Eurafrica: The Untold History of European Integration and Colonialism written by Stefan Jonsson and Peo Hansen explains the role of the economic and geopolitical exploitation of Africa in the foundation of the European Economic Community

“Europe will never be able to address the refugee crisis properly unless it is aware of its own histo-rical mistakes and role in shaping this current system”, argues Stefan Jonsson, a cultural theorist and intellectual historian, coauthor of Eurafrica: The Untold History of European Integration and Colonialism (Bloomsbury, 2014). Written with Peo Hansen, a political scientist specialized on the European Union, these Swedish researchers’ book explores the important role of the economic and geopolitical exploitation of Africa in the foundation of the European Economic Community (EEC) in 1957. They argue that an understanding of this untold history is key “to clarify[ing] the current relationship between Europe and Africa, characterized by inequality and migration catastrophes”. 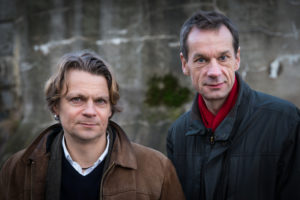 In early January 2018, when reached via Skype for the purpose of this interview, Stefan Jonsson was in Stockholm and Peo Hansen in Paris. Over the Skype call Hansen explained that “the idea of European integration was not only a cold war, human rights, peace project or about trade in general, but it also had a very strong geopolitical purpose”. The two Swedish scholars identify those same geopolitical and economic forces at play in the current deals that the European Union signed with Turkey in 2016 and Libya in 2017 for stopping the influx of refugees heading to Europe, as well as in Germany’s Aid Plan for Africa launched in 2017.
Hansen warns that “it is dangerous to think of the beginnings of the European project only as a peace project. [The] forgetting of a very dark past is fundamental to the Eurocentric understanding of history, with the intention of getting rid of things that are not convenient. Because if you want to sell the European project as a peace project, it is hard to do when you bring in the colonial wars and the Eurafrica context”.

The book by the Swedish authors offers a comprehensive analysis, written with a combination of scholarly rigor and journalistic flair, of the time between the aftermath of the WWI and 1960. The interwar period was marked by the decline of Imperial Europe. Hansen and Jonson investigated the various proposals put forward at the time for what was seen as a “European integration and rejuve-nation through a common colonial project” under the concept of Eurafrica.

“The idea of Eurafrica could be traced in the archives from the 1920s and 1930s in public, diploma-tic and political debates as well as in books, newspapers and pamphlets from that time”, explains Jonsson. The scholars verified the existence of a straight line connecting public debates from the 1920s to the signing of the Treaty of Rome in 1957. “France and Belgium demanded that their co-lonies be part of the European Economic Community. The first official labeling of that was ‘Inclusion of the overseas territories’, but it was also simply described as the creation of Eurafrica”, resumes the intellectual historian.

The political project of Eurafrica had three objectives: access and extraction of African raw materials; the consolidation of a new imperial entity that could compete with the United States and the Soviet Union, and plans for large scale settlements of white Europeans in Africa. To expand European territorial space into their colonies in the black continent was part of the geopolitical motivation – particularly Germany that was deprived of itsAfrican colonies in the Treaty of Versailles.

In their book the authors mention, for instance, Eugene Guernier, author of Afrique: Champ d’ex-pansion de l’Europe (Africa, field for European expansion), who proposed the mass migration of 500.000 Italians to Africa per year over three to five decades, as a solution for Italy’s nativity super-plus and unemployment. Guernier’s text was translated and published in 1935 in Richard Coudenhove–Kalergi’s magazine Paneuropa. Coudenhove-Kalergi, honored until today as forefather of the European Union, is quoted in Hansen and Jonsson’s book from his Paneuropa issue of 1929 titled Afrika : “Africa could provide Europe with raw materials for its industry, nutrition for its population, land for its overpopulation, labour for its unemployed and markets for its products”.

The authors worked on the book from 2009 until its publication in 2014. They collected material from the archives of The New York Times, from libraries in Paris, Berlin Stockholm, and National archives in Nairobi. However, their major discovery occurred at the Historical Archives of the European Union in Florence, Italy. “The archives in Florence cover the negotiations that came before the Rome Treaty. It was in Florence that we realized that Eurafrika was the red threat”, recalls Stefan Jonsson.

Question: You start the book by saying that Europe acts out of geopolitical interest just as much as the United States or Russia, but that Europe likes to present itself as a peace project. What was the aim of your research?
PH: Research has to be about truth seeking. That is your duty as a researcher. You cannot be at the service of the European project, or the Swedish state, you have to be independent of the forces that want to make you believe that history went a certain way. We ought to put the history of European integration on a more solid footing by addressing a huge part that has been left out.

Q: Did you have the topic of migration in mind when writing the book ? How is your research on the foundation of the European Union relevant to the migration issue?
SJ: It is extremely relevant. We did have the migration situation in mind when we wrote this book. Migration has been there before. Look at the end of the 1990’s people reaching for boats to come to Europe and before that also. Europe has to become aware of its complicity in building the whole mediterranean area into a kind of border zone to protect the privileges and opportunities on the European side. No sustainable migration policy can emerge if this past is not recognized.

Q: How can a book like this change the way in which politicians deal withAfrica?
PH: Awareness is very important. Once you have that awareness going around it, it can increase and all of the sudden, politicians realize that they have to change the way they talk about it. 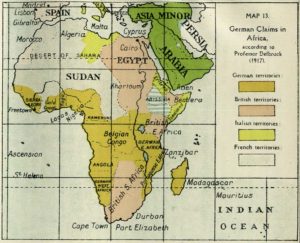 ‘German Claims in Africa according to Professor Delbruck (1917)’ – Wikimedia Commons

Q: How can Europe amend what it did in recent past with its colonies in Africa? Does Europe have a moral responsibility towardsAfrica because its colonial past?
PH: They have the responsibility of first acknowledging what they did, what we did. Everything starts with that. But we are not even there. On the contrary, European powers feel more justified in just going into Africa, sending their troops to do things; creating to some extent the refugee catastrophe that they are trying to protect us from.

Q: You mention in your book the African soldiers from French colonies that were sent to oc-cupy Germany after WW I and the racist wave that arose towards them not only in Germany but also in the rest of Europe. With the raise of xenophobic parties right now, does this mean that in Europe there has been a racist dormant society all this time?
PH: The beginnings of European integration are not only marked by an economic and political pro-ject but also an account of racial arrogance that originated in the colonial time. The modern form of racism is born from colonialism and slavery. It doesn’t really matter whether you have had a colony. Sweden had never had a colony in any respect but we still share the same sort of ideas that the co-lonial powers themselves have implanted, the whole heritage and legacy of that project. And it is in those xenophobic parties where it shows more spectacularly.

Q: What was the most shocking document or person from the past that you found out about when doing the research?
PH: We were quite amazed by the public debate about Eurafrica in the newspapers. We did not ex-pect it to be that widespread and to see how crucial the concept of Eurafrica was prior to negotiati-ons of the Treaty of Rome. Also prior to signing the Robert Schuman Declaration the French Go-vernment said that “we owe it to give Africa as a dowry to Europe”. Or the evening when they celebrated the signing of the treaty of Rome, there was a high-level French officer who said “we owe it to give a toast to Nasser”.

SJ: Both of us are very well read about critical literature on European Colonialism. From the Atlan-tic slavery to the horrendous histories about genocides. So what we found was a reflection of all that. What was surprising was, that this idea of European supremacy over Africa was so self evident for such a long time. There is so little critique or reflection about if of any kind. Even among the European socialists or communists.