On Atlas of Transitions' YouTube webpage four of the videos recorded during the workshop ‘Atlante - location scouting for a documentary film’, by ZimmerFrei, have just been released. Created and conducted by Anna de Manincor and Massimo Carozzi, the workshop included activities such as observation of urban places, writing, sound recording, video documentation and archive research. The four videos, which were presented to the public during the festival organised by Emilia Romagna Teatro Fondazione, Right to the City | Diritto alla Città (15-24 June, Bologna, Italy), are: 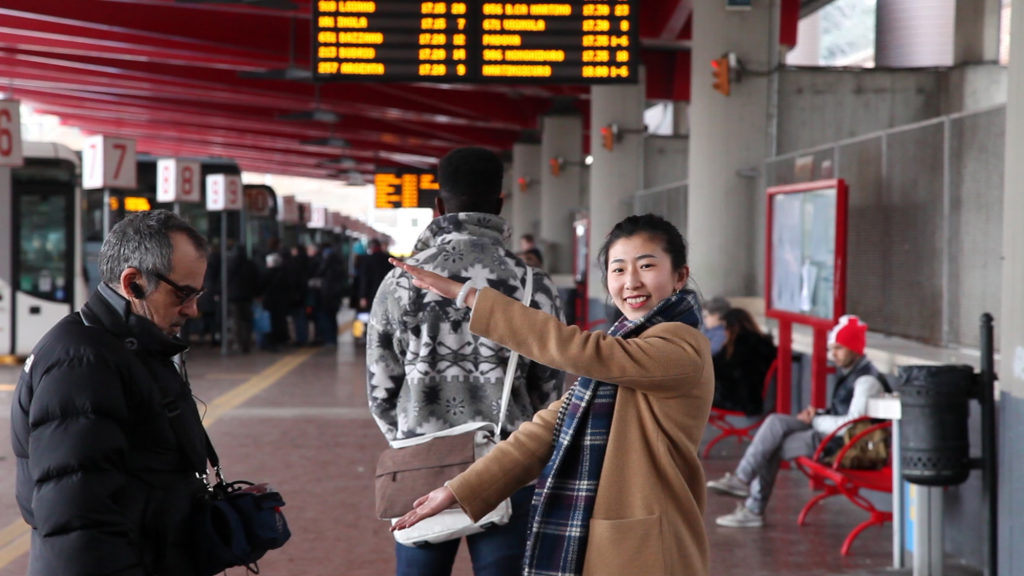 ‘La procedura’, in which one of the participants in 'Atlante' tells his own experience of the asylum-seeking process on a Saturday afternoon, in the middle of a pedestrian area in the city center of Bologna.

‘Cirenaica/Zona U’. Here, the obsession with IDs is told by a Chinese girl while singing Mozart softly at a closed market and in a public place near the Academy of Fine Arts in Bologna.

In 'via del Pratello', Tea tells her memory of the first time she watched ‘Amarcord’, by Federico Fellini, in Piazza Maggiore, Bologna, and laughed together with the people around.

'Landmark: Salaborsa' tells a migrant story about leaving the country of origin, learning Italian, and dreaming of flying to the U.S. The video was recorded near Salaborsa, the main public library in Bologna, next to which there are Piazza del Nettuno (Fountain of Neptune) and Piazza Maggiore.

extension
Resources
play_circle_outline
La Procedura
play_circle_outline
Cirenaica/Zona U
play_circle_outline
via del Pratello
play_circle_outline
Landmark: Salaborsa
Events like this
The docu-Film Monuments of Conflict & Convergence by Motus Terrae, has just been released. Discover more about Lavrio city identity, its history and people migration stories. Watch it here or visit Atlas of Transitions' YouTube channel.
read more
Imagine a giant urban chorus. Imagine the energy of a common vibration coming from different directions of the city. Imagine being part of a temporary community aimed at the creation of an extraordinary public event. A new opportunity for singing and music enthusiasts is coming to Bologna! It's called "Magnitudo, a collective act of voicing", and workshops start in April 2020. Find out how to join!
read more
If you wish to take part in an interdisciplinary artistic undertaking and learn some Polish along the way (or improve your communication skills in this language), meet new people, and learn about new forms of expression through art, feel invited to participate in "EXILE WARSAW 2020", a new multicultural project by Strefa WolnoSłowa.
read more
What to see and where to meet in May? Explore a busy month schedule ahead for Atlas of Transitions and its partners around European cities, from South to North. Two multidisciplinary festivals, final workshop presentations, participation at the Sabir festival of mediterranean cultures in Lecce...
read more