Anna Raimondo and the radio creatures

During the Atlas of Transitions Biennial, 'Right to the City | Diritto alla Città' (15-24 June 2018, Bologna, Italy), the radio artist Anna Raimondo presents a mixed performance entitled '(In)visible Radio Creatures#2_happening radiofonico transgeografico'.
In this interview we have talked with her about the power of voice and the experience of visibility and invisibility while living in a condition of clandestinity.

Q: Anna, you have travelled a lot and also lived in several countries… In what dimension does your work and your idea of art belong to your home, Naples?
A: I wouldn’t say Naples, I would say Campania, the south of Italy… the south, more broadly. I certainly bring my homeland with me in my own voice, in the language I use to express myself. Although I know four, five languages, I speak all of them with a Neapolitan accent. I think that this is part of my artistic path, as I work with my voice and through translation, thus always starting from my own way to communicate, from my language. In addition, and I do mean it, I think that the fact of being from Campania has made me closer to Morocco, where I have been working for years, and to Africa as a whole. And to South America, if you like… to the southern part of the world, I may say. What really interests me in this culture is the openness to create the public sphere, public spaces… The idea to develop spaces for the collectivity is a sort of constant, spontaneous, organic, and fluid and informal approach… being open-minded towards others, curiosity… Perhaps is indeed a feature of the south…

Q: What is the relationship between sound and voice, and then between sound and language, beyond the explicit messages that a language can communicate?
A: Voice and sound have a semantic value, always. No matter the language, any voice always communicates something, for instance through a breath, an exclamation, a shout. And sounds, even the non-vocal ones, such as the wind flowing through the leaves, the tolls of a bell, express meanings… so, both voice and sound have a form and an essence, always. This semantic value is what voice and sound have in common, which – to me – means that they also have in common an outward appearance. For instance, I can use my voice as a sound. My own voice is at the core of all my work at the radio and it crumbles the very meanings of language, which can after become music, sound… I think however that the point here is that any voice is inviolable… behind a voice there is always a human being – this doesn’t happen with sounds. And this is the reason why when I work with my own voice I allow myself to be more radical in comparison with the times I work with someone else’s voice. Actually, what I really care about is the act of listening, its aesthetic, formal and political value, as a meaning… 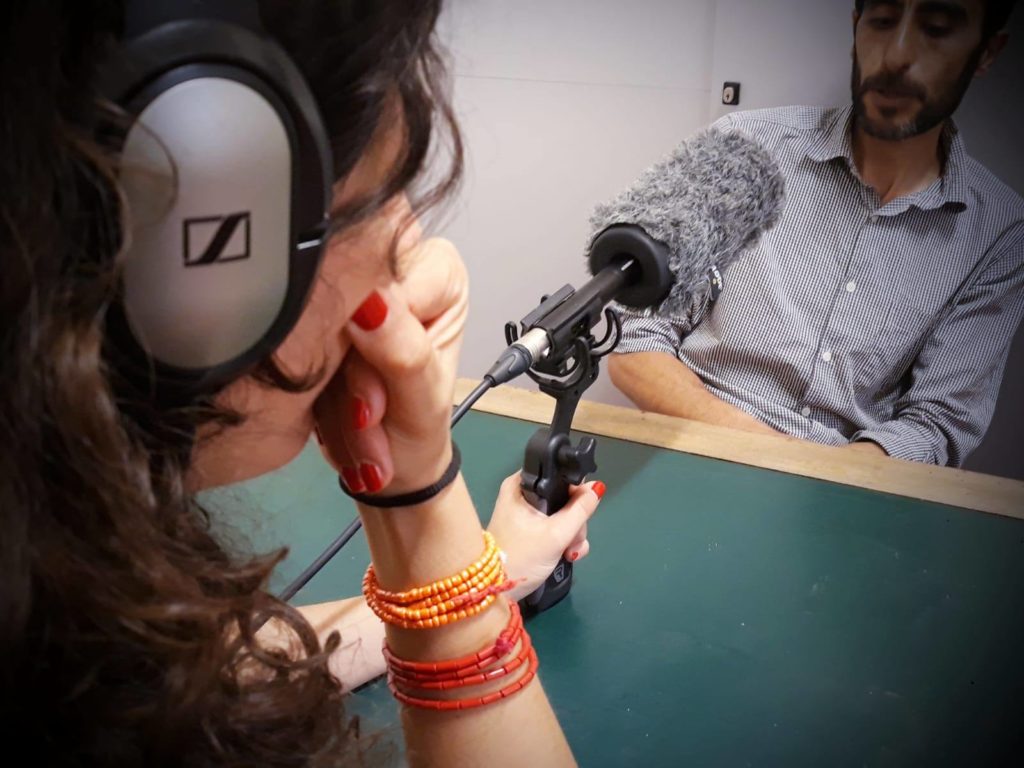 Q: In the performance you are developing for ‘Right to the city I Diritto alla città’, the festival of Atlas of Transitions, you are working on the idea of clandestinity. How do you define and interpret such a concept?
A: I have never been ‘clandestine’… I have never experienced such a condition first hand. I am a migrant, although a ‘luxurious one’ – I decide where and how to move. So, in order to develop my project, ‘(In)visible Radio Creatures#2_transgeographic radio happening’, I first needed to ask myself a few questions. To begin with, I wondered what living as ‘clandestine’ might mean to me. This would be a condition – certainly not a ‘state of being’. I would never say anything like ‘I am a clandestine’. This would rather be ‘at the moment, I live in a condition of clandestinity’… it is very important to bear this in mind… In addition, in my project there is also an exploration of the idea of city, of what citizenship means, thus rights... I imagine that, as a woman living in a condition of clandestinity, I would try to stay invisible… you shouldn’t be too visible, otherwise you would take some risks and you shouldn’t allow yourself to do so as you don’t have the rights to be visible... What is the role of invisibility? Starting from a reflection on the relationship between visibility and invisibility I began to interview people who lived, or live, in the condition of clandestinity to understand such a relationship in the city of Bologna and to then expand on that in my work.

Q: How did you choose the people you selected for interview and how did you conduct the meetings?
A: Silvia Bertolini worked with me as a mediator. As an activist and collaborator at Cantieri Meticci, she personally knew boys and girls who could be involved in the project. I may say that the very act of meeting these people has been a part of the creative process here… Subsequently, I had the chance to discuss with them the themes at the core of my work while walking together. After talking about their personal experience of the city of Bologna, we started dealing with the concepts of visible and invisible, which have a positive and a negative value depending on the context you consider them.
For instance, Moussa perceives himself as invisible at Palazzo d’Accursio in Piazza Maggiore, where he likes listening to music. There, he doesn’t usually meet the people he knows, contrary to what happens when he walks under the porticoes… To Hamed, Piazza Verdi is instead the place where the boundaries between visible and invisible coexist… According to him, you can see there Italians coming to drink and smoke, Moroccans staying under the porticoes and watching the movement of the people around… then there are the young Africans standing behind the glass recycling bins, on their own, who do not speak Italian… Hamed said all that from the point of view of an invisible person… nevertheless, he became visible the day a police officer got closer to him and asked him his ID… During the interviews I discussed this oscillation between visible and invisible… 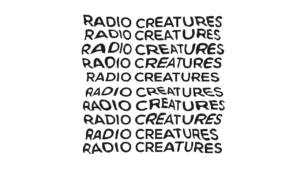 Q: What is the political criticism made by ‘(In)visible Radio Creatures#2’ about?
A: My main interest is simply to talk about the territory through the stories of the people who live there. I like working with women and gender-fluid people as well, as I am interested in the perspectives from which they map the space… However, in the case of this project, the matter wasn’t ‘to give voice’ to people – I definitely dislike such an expression, since people always have a voice, and this should never be forgotten… Rather, what I attempt to do here is to amplify the impact of these voices, and I will do so in different ways. For instance, by broadcasting the interviewees’ voice via radio at a local and international level. That perhaps concerns the political impact of my project, in which I propose a representation of the people I met that doesn’t reflect the one we usually see in the media, where migrants and asylum seekers are portrayed as victims. This approach becomes a time of collective listening, to reflect on the very idea of clandestinity.

Q: Do you already know how will you perform your work during the Atlas of Transitions Biennial?
A: My performance will be structured in two distinct moments. Firstly, there will be an installation presenting a series of audio portraits as a result of the meetings with Moussa, Hamed, Lamin, Jasmine, Mazen, Carlos e Zazà. Secondly, there will be a radio happening, a one-hour radio programme in which several excerpts from the interviews I will be put in conversation with an original script. The programme will be live, with a public made of people in flesh and bone here, at the Arena del Sole theatre in Bologna, who will interact with us while we will be broadcasting.
During the programme, which will be live streamed, I will activate the intimate and professional geography related to places and people I personally know… I worked in Buenos Aires, Dakar, Brussels, Marseilles, for instance, and I still have friends there, and ‘friend-spaces’, from which people will be physically and actively listening to us. The programme will be in several languages – Italian, French, Spanish, English… I will conduct the show together with Chloé Despax and we will broadcast fragments from the interviews, environmental sounds of Bologna, vocal contributions from the friend-spaces, to which I have also asked to send pieces of music, a song, environmental sounds – anything they think could answer the question, ‘How would you explain the concept of ‘clandestinity’ once this word won’t exist anymore?'. 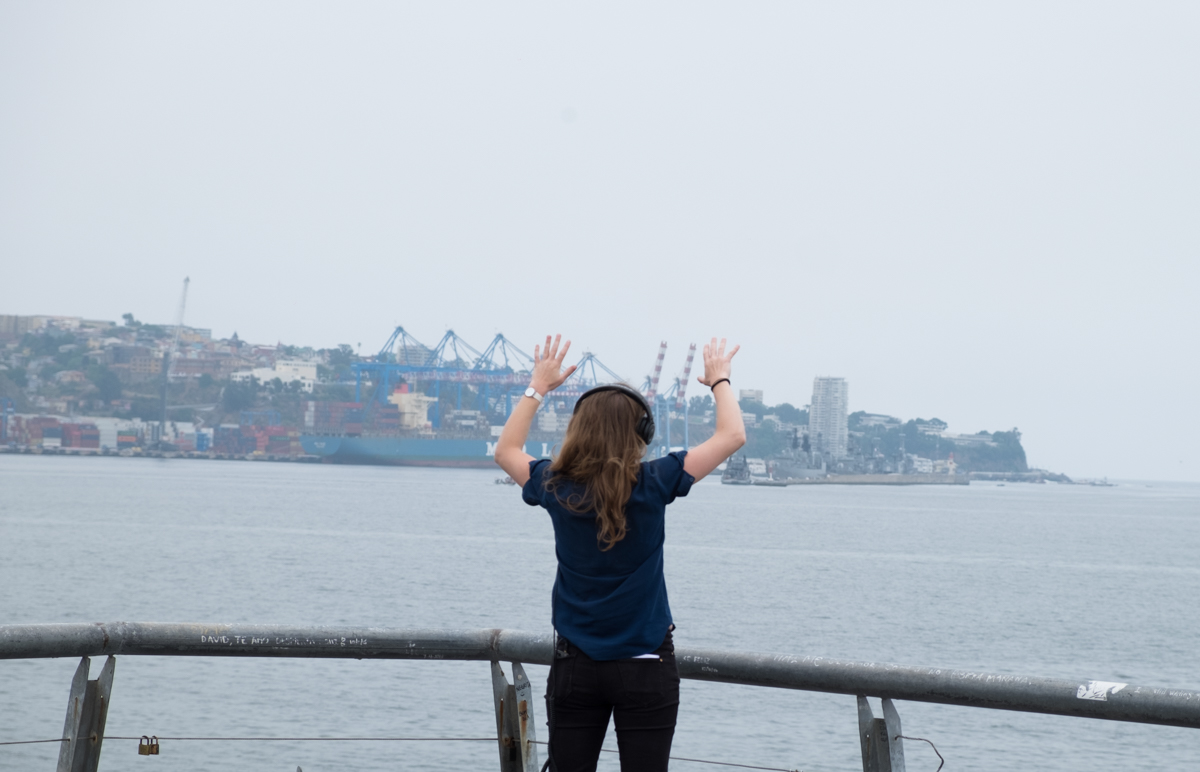 Q: What is the difference between radio and radio-art?
A: ‘Radio’ can mean ‘radio equipment’, which refers to radio diffusion, or ‘radio studio’, ‘radio language’… Language is the key word here to move to the idea of radio-art… The elements belonging to radio are in fact just a few. They mainly are sound, music, noise, environmental sounds, and silence. You can put all of them together and make, for instance, reportages, satire or music programmes… or a work of radio creation. This happens when there is an artistic intention, which means that you express contents clearly but without a need for objectivity, and that you look for an aesthetic intention, which concerns a search for the composition of sounds and the relationship between them… In my case, this intention is political as well.

Q: What is an artistic intention, then? A kind of premeditation, an impulse…?
A: In gestures, in the way you talk, there is always intention… this is like a spring. Listen to how this word sounds… in-tension… yes, it is like a spring, to me! It points at a specific direction, which is nevertheless vulnerable, as you do not always get what you want, and it doesn’t actually represent an objective, a goal…
In the case of (In)visible Radio Creatures#2, my intention is to open myself to a condition, that of clandestinity, which I don’t experience and I don’t thus know, which I live ‘from outside’, through the representation provided by the media. I may say that this project has been a sort of excuse to me, so that I could understand something I don’t know and then tell it to others in a new and personal way.

Q: Can you tell me why you entitled your project ‘(In)visible Radio Creatures#2_transgeographic radio happening’?
A: ‘Radio creatures’ is an expression I like as I think that we all potentially are radio creatures... you don’t need to be a journalist or an artist to make radio, to be radio… You just need voice and intention. Also listeners are radio creatures, so I like to think that during this radio happening we will be able to create a sort of trans-geographic community. The public will be there – from home but also from public spaces and in different countries… In that moment we will all be radio creatures, and the time of listening will join us beyond space. During the programme then, there will be a debate about the ideas of visibility and invisibility, of course, which is the topic of the performance… For this reason the project’s name plays with words… in-visible, where ‘in’ stands within brackets… The people who make radio are usually invisible, but at least this time, here at the Arena del Sole theatre, we will all become a little visible…