In Spring 2018 a call for papers has been announced inviting practitioners, professionals, academics and scholars to submit essays about the function of the arts in redefining the phenomenon of migration, investigating themes such as artistic performance, theatre for development and social change, working practices in multicultural productions, and not only. In its endeavours, Atlas of Transitions seeks to create intercultural meeting spaces for people with diverse cultural backgrounds and to encourage the circulation of ideas across the globe.

'Performance as a space to voice a silent migration' is the contribution submitted by Alessio Mazzaro, an Italian visual artist, director and histories researcher, who recently relocated to Brussels. Co-founder of different collectives, S’odinonsuonare -Sound art and performance, the video broadcast project Couchscore, and Collettivo AAA – a collective investigating participatory and collaborative practices in public space. Alessio Mazzaro is the chief editor of 'European Edinost', an online and printed free newspaper, a laboratory where artists, academics and citizens can create collectively a framework for a new antifascism.

Performance as a space to voice a silent migration.
Performing witnessing
by Alessio Mazzaro

In Morocco the jewish quarter is called Mellah, an Hebrew word that means salt as reference to the first quarter that was built above an old salt mine in Fès. Between the 50’s and 70’s, most of the moroccan jews left the country in a silent migration, mainly to Paris, Montréal and Israel. Between the different reasons we can state: the foundation of Israel and its Zionist “programs”, the independence of Morocco and the fact that it joined the Arab League, the politics of the moroccan nationalistic party Istiqlal, the learning of a new language -French- and the introduction of laic education. From the reading of articles, especially the ones written by prof. Yolande Cohen (UQAM, Montreal) I discovered that apparently there is no collective memory of this depart. Furthermore even if in the moroccan constitution are recognized the berber and jewish origins of the country, there is no trace of jews in the moroccan history manuals.

So I decided to move to Paris to create, during a residency at Cité Internationale des Arts, a space where to attempt the construction of the missing collective memory. The gallery of the residency became the stage for the installation and performance “Mellah”: a symbolic and collective space, where the memories of the migration and previous life in Morocco, were shared in a collective live archive. 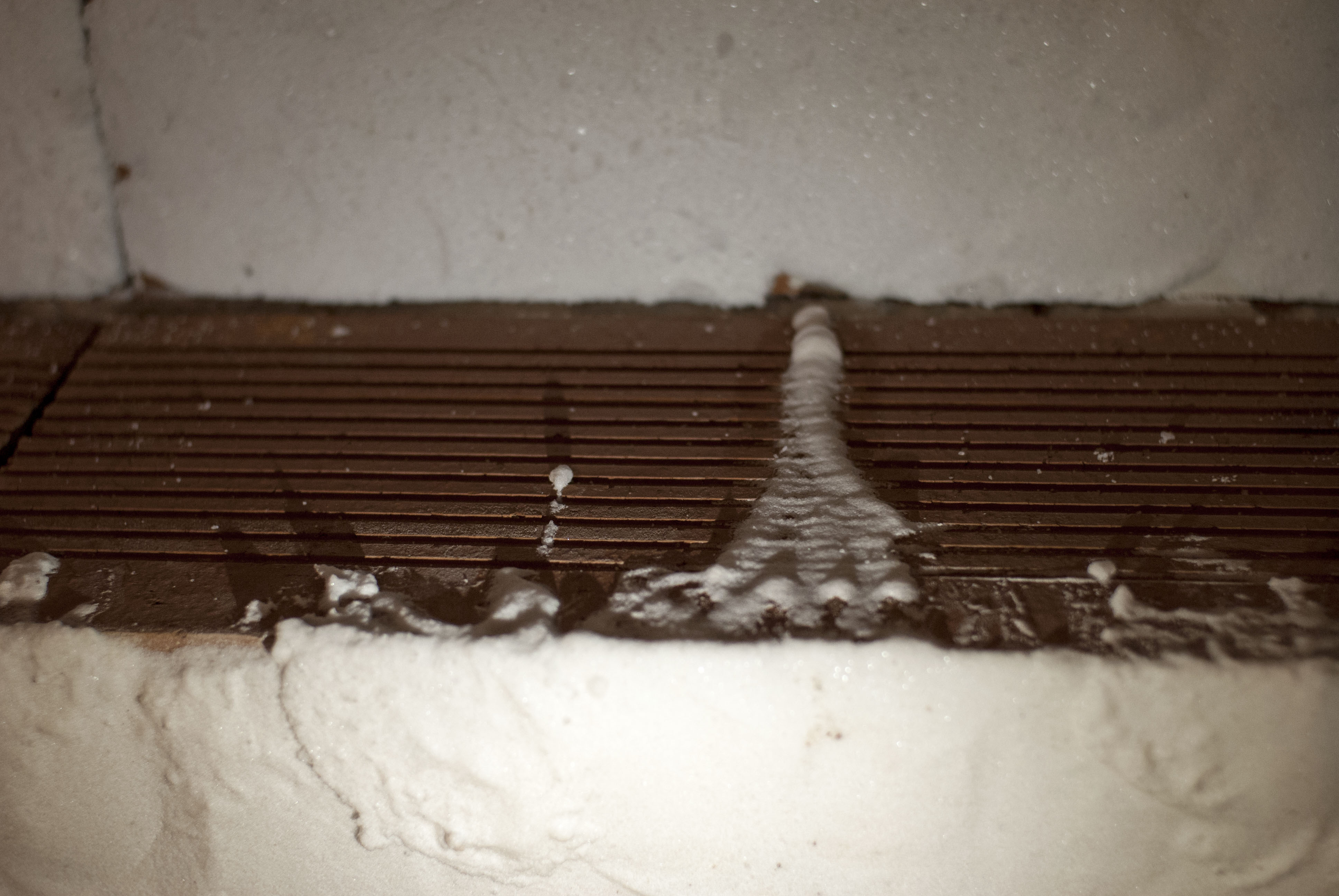 For seven days, every day at the same time, a different witness was seated on a chair in front of me, between two salt walls. I asked every time the same three questions to start a dialogue between me and the witness, between the moroccan jewish community and the audience, Paris and this forgotten migration. It became a regular practice for the visitors that came back more than one time to ask new questions, to listen to a different tale on the same history. The dialogues took out as main topics the peculiar and “peaceful” relationship between jews and muslim in Morocco, the role of education as a power for emancipation and the nostalgia for an ideal place in the memory, quite different from the real one.

"Mellah" is a project created for Paris and its citizens. A symbolic, intimate and common space where the private memory of Moroccan Jews who emigrated to Paris was activated and shared. The three questions I posed were: Do you remember the Mellah? Why did you leave Morocco? Why did you come to France?

It's important to say that I am not a jew, nor a moroccan, and that I was attracted to this story -as for my previous pieces- for its peculiarities and the possibility that they gave me to question collective identity and integration, in relation to subjectivity, oral memory and first-person accounts. In fact, I have been working for more than four years on a story I apparently don’t belong to, on a migration I have not followed, with a community to which I am an outsider. Creating a space for this story to be told in the performance “Mellah”, I created also a space for me in the story. Interested in documentation of contemporary performance practices that aim to affect the audience (as socially engaged, community based and wellbeing pieces) I asked myself: How do we relate to a story that is not ours? What do we keep of it to make it our own narration? And so how to document a performative project that has the will to transform the public, if not trying to document what remains in the public? I proposed everyday to a different spectator to give me his/her point of view -through the camera- on the testimonies. I gave them the freedom to film on the support they preferred and had with them (iphone, compact camera, super8, 4k camera). Based on these points of view, integrated with my audio recordings, came “5 vues sur 5 témoignages” (5 points of view on 5 testimonies): a collective documentary about the performance.

In 2018 I used it to start a discussion on the moroccan jewish migration and the related issues. Screening in different contexts -Arabic and jewish community spaces as well as art spaces- and recording the audience impressions and the new pieces of the story they decided to add after the vision. This gave birth to a longer project for which I started to follow the journey of the migration, going to the other keys spots of the story collecting the other point of views on it.

“A question of the relationship between Jews and Muslims in a country like Morocco”
from an interview with the painter Abdelkebir Rabi.

In June 2018 I went to Casablanca, invited by the curator Mohamed Rachdi, to show “5 vues sur 5 témoignages”. This travel has become an occasion to collect the voices of the muslim community and of the jews still living in Morocco. Moroccan Arabs told me about the osmosis between the Berber, Jewish and Muslim cultures, how these three cultures in old Morocco were synchronized and fed each other, they knew each other: people had a human relationship first of all. Stories that give us hope if we think of a Europe of new Populisms and issues of identity and religious ideology in the Middle East. In Casablanca I also discovered another story, what I thought a departure for Israel was instead a history of political strategies, colonialism and post-colonialism: "we have not left, we have been sent", “it was the conjunction of the political interest of the newly created State of Israel, of the United States -supports of Israel- who put the boats and the monarchy that issued the collective passports”, “in that period there was a psychosis, we were afraid, but a psychosis that was created, wanted” (from and interview with the activist Fanny Mergui).

A second video was the result of this travel -this time conceived from the beginning as a video and not as a performance- Shukran (Thank you). A celebration of the coexistence from a very particular example that represents the history of Morocco. A reportage composed of interviews, random meetings and visits to the remains of the Jewish district of Casablanca guided by those who lived there. A counter narrative that shows how Jews and Muslims can live together peacefully on the same soil: one thing that spectators of the Israeli-Palestine conflict through the media believe impossible.

Finally, last October I started to work on the third chapter of this trilogy, thanks to the Italian Cultural Institute of Montreal and an invitation from Yolande Cohen and the Spanish and Portuguese Synagogue of Montreal. Because I had only the chance to talk with one woman in the past years, in Montreal I decided to interview only women and wrote down on my notebook before starting “la voix femmine” (the feminine voice) as a provisional title. The case wanted that most of the women that volunteered for the piece had a strong (biographical) connection with the oral tradition of judeo-arab songs. A third chapter that reflects on the female experience of migration, the traditional female singing and the absence of nostalgia in the female migration stories, is now under work.

In these three example, the interview becomes a “practice of composition” in the spirit of the post-dramatic theatre. The interviewer poses a question to the witness in the same way a director during rehearsal gives a topic to an actor to improvise on. 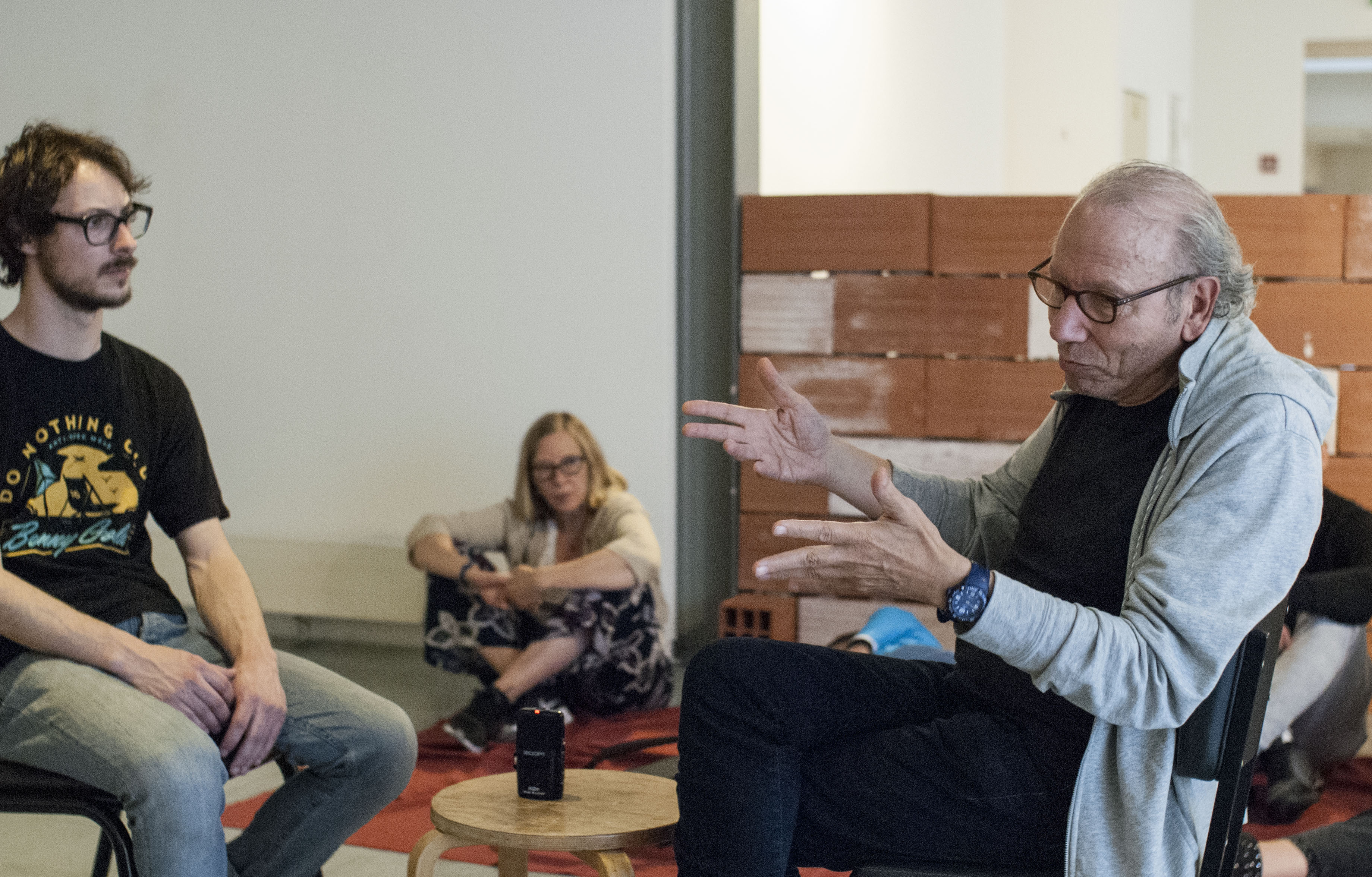 All the generated material goes then, in both cases, through a strong process of cutting and strategic montage in which usually the most interesting parts are not the direct responses to the questions, but what comes after. During the recording of the interviews, audio and video tech are reduce to minimal, sometimes sacrificing also the image quality, in order to keep at ease the witness and to obtain a testimony the most natural as possible. Furthermore, the witnesses don't know before the meetings the questions I will pose, in order to avoid that they come with a constructed discourse where they had the time to impose an aesthetic direction.

Notes on my practice

In my artistic practice there are two levels of intervention: (1) creation of a space of testimony to (2) intervene in the social space. I create performative spaces where the public can experience a story, and the dialogue between witnesses/tellers and listeners generates a new narrative or collective memory of a subject. To allow the public to attend and participate in this process, I need to think "physically" of space of intervention and create a set of rules. Space and rules act as a device, facilitating dialogue and exchange on historical events and open wounds.

I have also realized that the work must leave spaces for discussion, holes to be filled, in order to activate the need in the public to solve a problem, a tension, by adding more facts to the piece. It is the presentation of an "unresolved" that makes people talk, as in the physics or natural sciences, where "the motors of the action" are the discrepancies, the Δ and not the similarities. (witnesses don't talk to me because I belong to the same community, or we have a similar story)

In an exchange of emails with Peggy Phelan (Unmarked: the politics of performance) about my pieces she wrote: “a witness gets to be a witness by speaking/performing/sharing what s/he has seen. prior to the act of making that public/social he or she is merely an observer. to be a witness is to perform some version of recollecting”. The audience attending a performance of documentary theater, can be divided into two groups: the people who are already witnesses of the event subject of the performance, and the public who becomes witness through the experience of the performance. According to the Performing Studies, in the first group there will be the Primary and Secondary witnesses (who lived or saw the incident) and in the second, the Tertiary witnesses (who hears the story in the performance). To each class is associated a different task within the artistic practice: to the primary and secondary witnesses the creation of a new collective memory, to the tertiary witnesses a social / political activation. We're talking about works that through words want to activate actions / reactions and processes in the audience: Speech acts. John Austin defines a speech act as a means implemented by a speaker to act on his environment by his words. We could consider the testimony of witnesses in a performance as speech acts on the public.