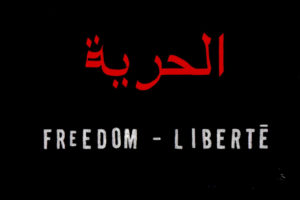 Louise, where are you from?
I was born in Calais and I grew up here. I went to high school and to my first course in animation studies in Roubaix, near the city of Lille. Later on, I spent a year in Norway, then I moved to Lille and then Calais, in 2014. In 2015, I lived in London for ten months, before moving back to Calais and finally settling in there in 2016. So, even if I would say that I am from all these places, I feel that my life experience in Calais has called into question and impacted my sense of identity.

What kind of relationship do you have with Calais?
Calais makes me tired, and inspired. It is an unfair place, it is hard, rainy and windy but, at the same time, it is beautiful and full of hopes. It is a ghetto, of course, with all the dramatic situations and difficulties that this entails. Calais is a symbolic space, as it is symptomatic of several contemporary issues... In such circumstances, I think that the act of expressing yourself becomes essential, vital. It teaches you to stand up and resist. For an artist there is no better way to create than to be so dedicated to a cause. People who come here feel that there is this rumbling energy that just wants to blow up! Calais represents despair as well as the greatest hope we have.

Why did you choose to focus your film on the refugees living in Calais?
I was asked to join the production of an international, independent collective animation for a collection of films about strangers, which then became the title of an anthology. Therefore, obviously, I came back to Calais and met the so-called ‘strangers’ of my own town. I met them without expectations or preconceptions, as I did not mean to turn them into a study subject. Rather, I wanted their life to enter the film and permeate my own life through that experience – by instinct, I let myself navigate and reach unexpected places. In addition, I wanted to understand and start doing something, helping somehow with my professional skills and abilities.

How did you create your images? Why did you use different means of expression?

From a practical viewpoint, I drew on paper most of the backgrounds you see in the film, through pencil, gouache, and ink techniques. Most of the pictures here are 2D frame by frame animation on computer but there is also some drawn animation on paper and a part of drawings on photos, and real footages as well. I love the result. As a vibration, the final effect is vivid and spontaneous.
I like working in different places and through different means of expression. I always bring with me a sketchbook. I value diversity, and this kind of collage approach makes it difficult to define my artistic production. I think that features of my work are indeed versatility and density. For me, this represents a sort of impressionist way of documenting reality, which is amplified by the use of both video recordings and drawings over photographs. But more importantly, this is the way in which I keep my work fun and exciting, so that I do not get too tired of it. Making a film is emotionally draining!