Poetry on the move

In March and May 2018, the slammer Nicolò Gugliuzza led two workshops with young people from different countries of origin at Arena del Sole theatre, Bologna, Italy. He trained the participants in the performance of poetry slam before they could challenge each other in the contest organised by Emilia Romagna Teatro Fondazione for ‘Right to the City | Diritto alla Città' on 16th June in Bologna. The interview with Nicolò Gugliuzza here explores how poetry slam can take part in the inclusion process of migrants and asylum seekers and highlights how different languages within a common creative environment can actually help people meet and understand each other.

How do you describe ‘poetry slam’ to the people who are outside of this artistic field? And what are the goals of poetry slam as an expressive genre?
I talk about poetry slam as a ‘game’, as an entertaining and playful activity. Poetry slam gives a community value to the artistic and poetic dimension thanks to the presence of a contest, which makes protagonists of the event both the poets challenging each other and the people who, randomly taken from the public, participate in the contest by acting as judges. Indeed, at the core of poetry slam there is the involvement of the public, who interacts with the poets on stage. This expresses the community vocation of this artistic genre, which creates equality, a sort of ‘horizontal axis’, between poets and the public, who, by performing the judge’s role, becomes protagonists of the contest as well. The public represents, in fact, the actor who ‘sends’ the poets forwards, round after round… The power of oral poetry is actually ‘to slam’, to involve the public. Poets can do it through a physical approach, a rhythmic or a theatrical one, even by the means of cabaret acts… The point is that poets should be doing poetry and reaching the public. This represents the great artistic ability of oral poetry. 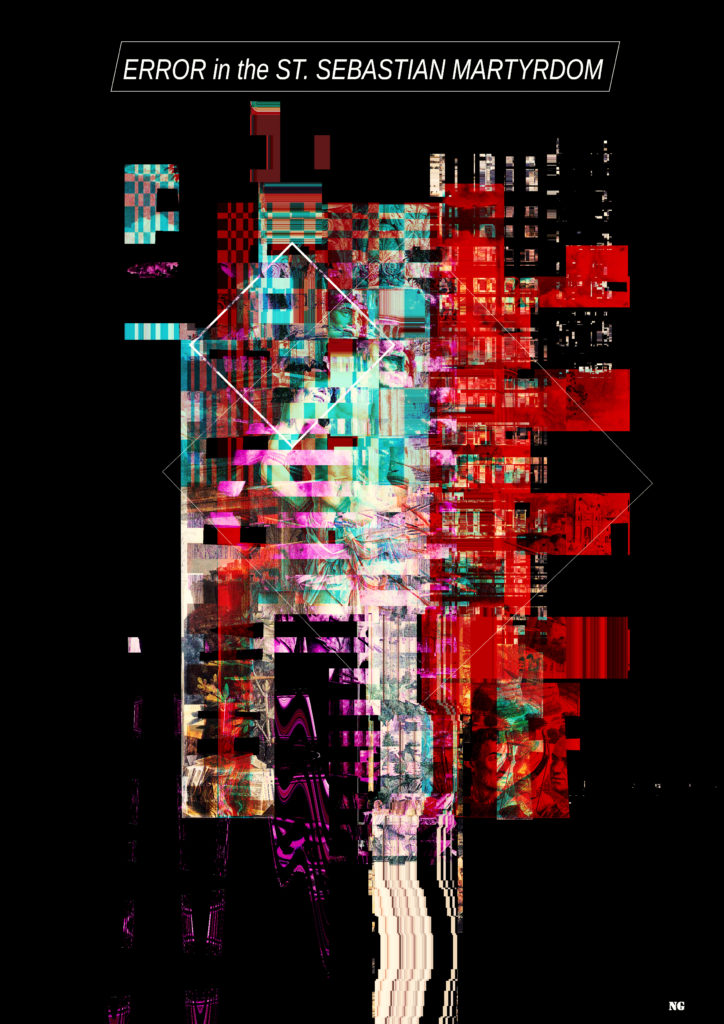 What has your expressive and artistic path in poetry slam been?
When I was a teenager I started writing and also performing in theatre plays. I used to write prose and read a lot. I then enrolled at the university to study anthropology and I continued to perform at theatre courses in Bologna. Nowadays, I deal with social and cultural anthropology while building the workshops I conduct upon such studies. During my first years at university I used to hang out with a group of poets… we were a happy gang of reprobates (he laughs)… and I first got in touch with poetry slam. In that very moment I realised the oral and performative potential of poetry. It has been important, as I felt I was limited by the practice at theatre, where I suffered the fact that I could not cultivate my own textual production.

So, I discovered slam poetry when I was twenty, I quit theatre and started taking on poetry, whether it was classical poetry or not, and working on orality with an analytical approach. As a slammer, I began to seriously deepen my artistic path after graduating in anthropology. My dissertation, which focused on the relationship between oral traditions in African literature and migratory context, employed case studies such as hip hop and poetry slam. Later on, I founded a collective, called Zoopalco, which was the first one ever born in Bologna dealing with oral poetry. I am not a very active member of the collective nowadays; nevertheless, I have a high regard for it. Zoopalco is the group that organises the majority of the poetry slam events and ‘open mics’ performances, which are not based on competition, on the territory of Bologna. By the way, I believe that the artistic dynamic of a genre such as poetry slam should always be managed with a certain intention, a sort of awareness, by both organisers and poets, as they put on stage and practice a performance that has a specific vocation, thus always implying a form of responsibility, in my view… I mean, you cannot ‘make poetry’ just to satisfy your ego or to entertain, otherwise you may corrupt the goal of poetry slam – the community value it expresses…

Poetry slam was born in America in the 1980s thanks to Mark Kelly Smith, a poet coming from the poetic underground scene in Chicago, and, in Italy thanks to Lello Voce, one of the most important figures of the Italian oral poetry… but poetry slam is also a genre rooted in contexts that do not have anything in common with avantgarde and academic poetry. This reflects the power of the poetry slam performance, which has rapidly spread across ghettos and suburbs, where it sets a performative scene that can be defined as ‘horizontal’, since it does not need anything else to be… no music, no costumes, no scenography… Poetry slam just needs people willing to talk and people who listen to them – this is the revolutionary power of this genre. It is thus important to encourage poets to search freely their own way to ‘make poetry’, to stimulate the creation of their performances… This is what local slam collectives actually attempt to do, through the promotion of ‘open mics’ events and culture, for example. In such settings, in facts, poets can go on stage and perform their texts outside of the dimension of a contest. Today poetry slam is a widespread reality everywhere… 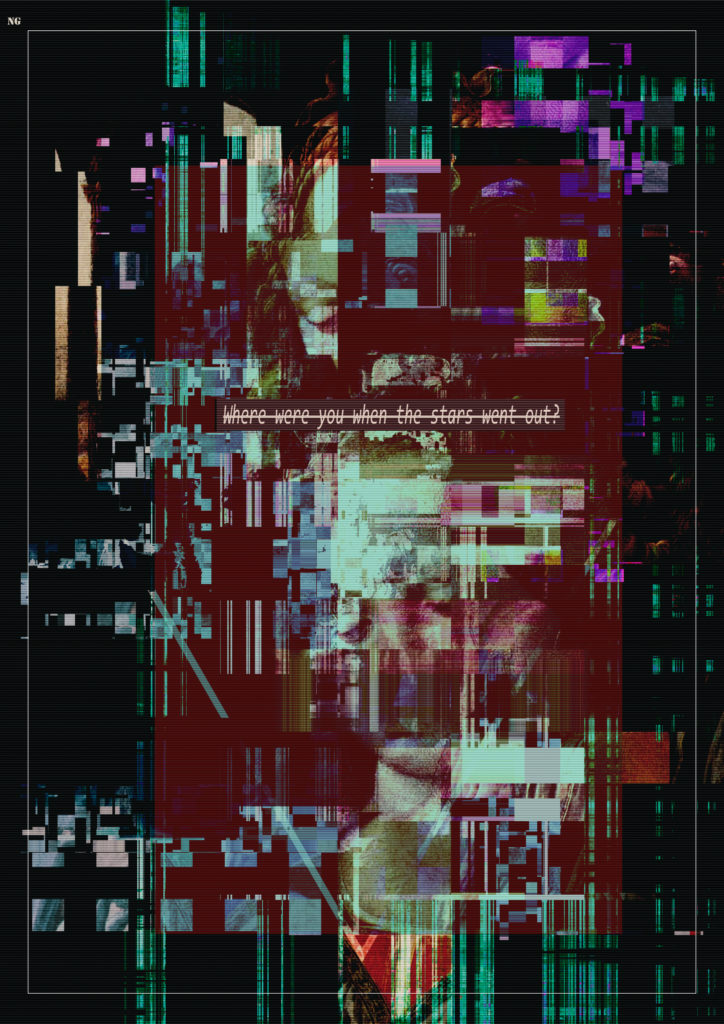 'Where were you when the stars went out' by Nicolò Gugliuzza

Tell me something about your artistic projects…
I did perform poetry slam for several years, I almost devoted myself to it (he laughs)… Four years ago I started bringing it to schools and working with it in the high schools here in Bologna as well as in the youth detention centre in town… Then, as a slammer, I left the Italian scene, although I kept studying oral poetry while cherishing my attitude to it and to poetry more broadly. Nevertheless, I began to be interested also in other forms of poetry… and then in performance and music… From here comes the project ‘Waiting for Godzilla’, which I have developed together with Tab Palmieri, the electronic music composer I released two extended play records (EP) with in 2016 and 2017. After that, I have brought my artistic research forwards thanks to my exploration of visual poetry, which is an approach deepening the relationship between poetry and image – the power of written text in combination with visual representation –, which connects and creates links between poetic content – not necessarily a verse – and aesthetic… Recently, while living abroad and encountering new realities, rich in creative research and inspiration, I have started to ‘make’ poetry slam again, in French and English.

What does your poetry talk about?
A: I think that the content of the poetry I write has changed a lot throughout the years, although it has always been characterised by my social commitment as well as personal experiences. In my poetry you can find a mixture of styles and codes, and different imaginaries, which may be mythological, prosaic, disgusting even… Somehow, in my work I try to create ‘dissonances’ by using different and distant areas of reference. I may say that such an attitude is often engagée…

The participants in your workshop have brought their own poetry on stage during the contest organised for the festival ‘Right to the City | Diritto alla Città'. How have they represented the migratory phenomenon in their works?
A: The participants in the workshop were especially interested in the way in which poetry slam allow them to express themselves. Migration was nevertheless part of their personal background, since some of the young Africans here are migrants and asylum seekers, coming from the refugee centres in Bologna. They speak different languages… Portuguese, English… and the workshop has also involved Italian and second- and third-generation teenagers. The sessions have mainly been conducted in Italian – a language that was not known by each participant at the same level –, and the resulting artistic production has therefore become a sort of linguistic métissage. In addition, poetry, as a kind of polyphony, has been the means through which the participants have been able to explore the themes related to migration, also thanks to the act of sharing their personal experiences within the group. When you work in a context in which different languages are spoken, poetry slam shows the great impact it can have on people. Even if you do not explicitly focus on the representation of migration, in fact, you always spontaneously move close to such themes, simply by getting used to listening to languages that are different from your own…