Performing metaphors
into a physical space

On Media@LSE, London School of Economics and Political Science, based in London, UK, Pierluigi Musarò's working paper has recently been published. It is entitled 'Performing metaphors into a physical space. The role of participatory theater in promoting social coexistence between citizens and newcomers' and it analyses the creative work that Cantieri Meticci, one of the Italian partners of Atlas of Transitions, performs with migrants and newcomers in Bologna, Italy.
The paper can be downloaded from LSE's platform - here, its abstract: 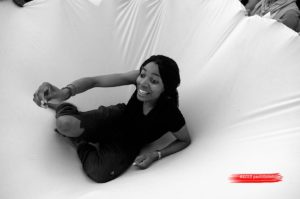 Negative portrayals of migrants shown by media not only neglect reporting the impact of migration on communities. They are also transformed into outsiders and different to Europeans, subjects and objects of fear, experiencing the fear of being rejected, and inspiring fear in the resident populations. While discussing the link between media logic, theatrical performance and moral imaginary, the paper will shed light on how the theatrical metaphor of cosmopolitan solidarity is challenged by the physical proximity of the ‘other’. It specifically analyzes how Cantieri Meticci - a theater company based and active in Bologna (Italy) involving asylum seekers, refugees, migrants, and Italian citizens — use participatory theatre to resist, rework, or disrupt the mainstream logic of the border spectacle while also promoting social coexistence between citizens and newcomers. As such, the analysis of their artistic practices and social interventions provides an insight into other methods of being political subjects ‘before and beyond the law’.

The paper is part of the research developed by Pierluigi Musarò
between 2015 and 2016 during his stay as a Visiting Fellow
at the Department of Media & Communications,
London School of Economics and Political Science, UK.

extension
Resources
bookmark
Visit Media@LSE Working Paper Series webpage
bookmark
Download the full version of the essay here
Events like this
What is the role of performing arts in challenging the dominant narratives and imaginary on migration? And, specifically, how can performing arts support diversity in European cities? Through different research and curatorial experiences lead along Atlas of Transitions project, the volume offers new insights on the ways in which artistic practices build spaces of resistance, forms of subversion, and counter-hegemonic discourses on migration.
read more
Which relations and practices can be interwoven between the artistic field and academic research? How they mutually nurture themselves? Our French partner, Le Channel Scène National De Calais, in collaboration with the University of Lille, has tried to answer some of these questions. The results are collected in the new issued paperwork - Porositès - which investigates concept as caring, shelter, exile, and borders. Check it out!
read more
Read more about the key theme of discussion that will accompany the participants during the whole 'Politics of refuge' research seminar taking place during the 'A Taste of the Other' cultural event at Le Channel Scène Nationale de Calais from 24 to 26th May 2019.
read more
Melissa Moralli, researcher for Atlas of Transitions, is now doing a period of visiting scholarship at the Institute of Public Knowledge of New York University, where she presented the project on May 1st. During her visit, she is attending different seminars and events on topics such as International migration, borders, political role of arts, cultural diversity.
read more