“All the technology we use now somehow has its origin in Congo” – Peace activist John Mpaliza talks about the war in his homeland, and the exploitation of minerals that is killing children.

Every journey starts with a single step. John Mpaliza (Bukavu, 1969), Italian citizen of Congolese origin, has come a long way since he left his mother country twenty-five years ago. He was once a refugee seeking political asylum. Today he is the peace activist who, through walks, tells people about the twenty-year long war devastating Congo, in which John Mpaliza has lost father and sister. As he says, “this is not just a war of occupation but also a war for the exploitation of minerals”, especially cobalt and coltan, the precious metals employed in the production of mobile-phones. And in 2010, after doing El Camino de Santiago, the pilgrimage route across Spain, John Mpaliza decided to leave his ordinary life and start walking for the peace of his homeland.

In January 2018, when, for this interview, I met him in Bologna, Italy, he arrived carrying his only belongings – a backpack and a guitar. “I would not be here now if it wasn’t for El Camino de Santiago”, and his eyes and face shined while recalling the pilgrimage. “After walking those 800 kilometers, I returned to Italy as a changed man. I had understood that it is right to dedicate my life for the good of others”, he says. John Mpaliza, once back from Spain, left his house and his job as an IT engineer at the City Hall in Reggio Emilia – the town in northern Italy that adopted him more than twenty years ago – and, with only a backpack and his guitar, he started walking from Reggio Emilia to Helsinki, and then to Rome, Reggio Calabria, and later on to the European Parliament, twice. He was first received on 11th September 2012 in Strasbourg and on 8th December 2016 in Brussels, after a 1.300 kilometer peace march. There, with the support of a group of sixty Italian citizens, John Mpaliza called attention to the dramatic situation in Congo and asked for peace in the country. 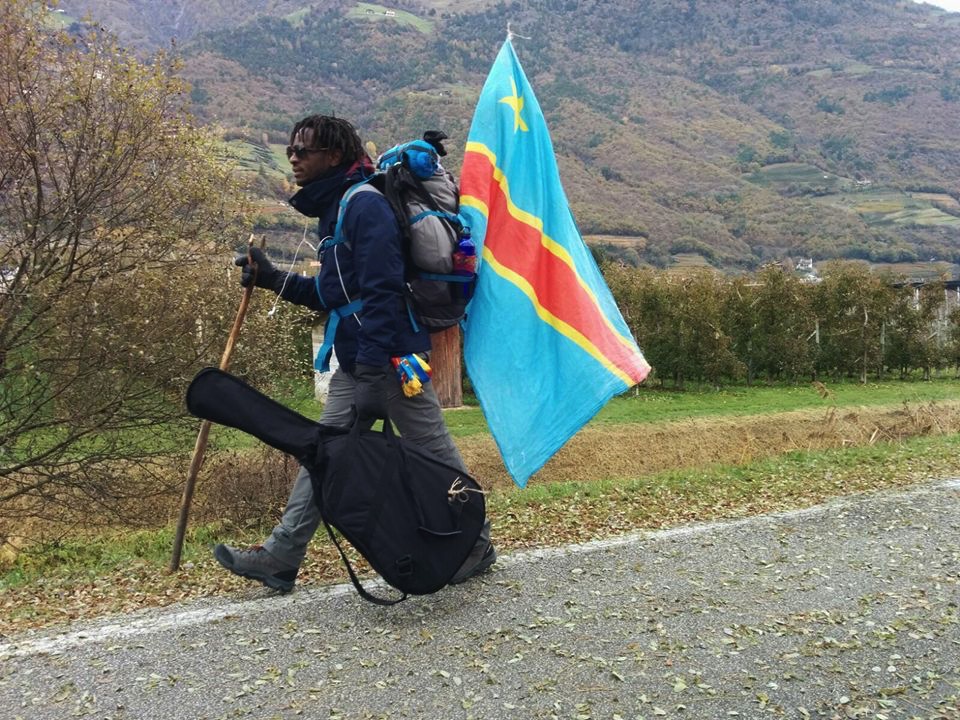 In Brussels, the peace activists were welcomed by several European Parliamentarians, including Cécile Kyenge, who is Congolese and Italian herself. On that occasion, they delivered and presented a ten thousand sign petition asking for international intervention in the city of Beni, in northern Congo, and demanded the traceability of the minerals extracted in the country. The request was supported by Amnesty International’s report ‘This is what we die for’, published in 2016, which documents the abuses occurring in the cobalt mines in Congo, where children are exploited and forced to work long hours in miserable conditions.

“In addition, coltan is a slightly radioactive metal. The children working in such mines are therefore condemned to die by disease“, John Mpaliza claims. By raising his voice, he then keeps explaining that: “Coltan is employed in the production of smartphones, microchips, micro-condenser devices. Cobalt is instead used to make batteries for electric cars. In other words, all the best technology we have today has somehow its origin in Congo. This country is the world’s largest producer of coltan, as it represents about eighty per cent of the whole world production. It is also the world’s larger producer of cobalt. I am talking about sixty per cent of its world production”. According to John, what is happening in Congo, with the silence of the international community, is a ‘genocide’, which is originated also by the exploitation of minerals such as coltan and cobalt, which are employed in the production of the last generation technology. “It is bloody money“, he concludes.

Over the last two years, John Mpaliza has been planning a pilgrimage across Africa, but as he explains, the project has been postponed because of the unstable political situation. “Talking at the European Parliament does not mean that solutions arrive immediately. Promises were made, but today we see that the situation in Congo continues”, he says, lowering his eyes and voice. When John Mpaliza does not walk, he gives talks in public. The peace activist is frequently invited by associations and schools to talk about the last generation technology to children and youngsters, in order to make them know what actually occurs in Congo, where people, including children, die due to the production of the very same smartphones that we all use in our daily life.