Théâtre de Liège interviews Pierre Etienne the day in which the cultural animator, a well-known artist in Liège, presentes his show, entitled “Les Sans”, to the students taking part in the Atlas of Transitions workshops. 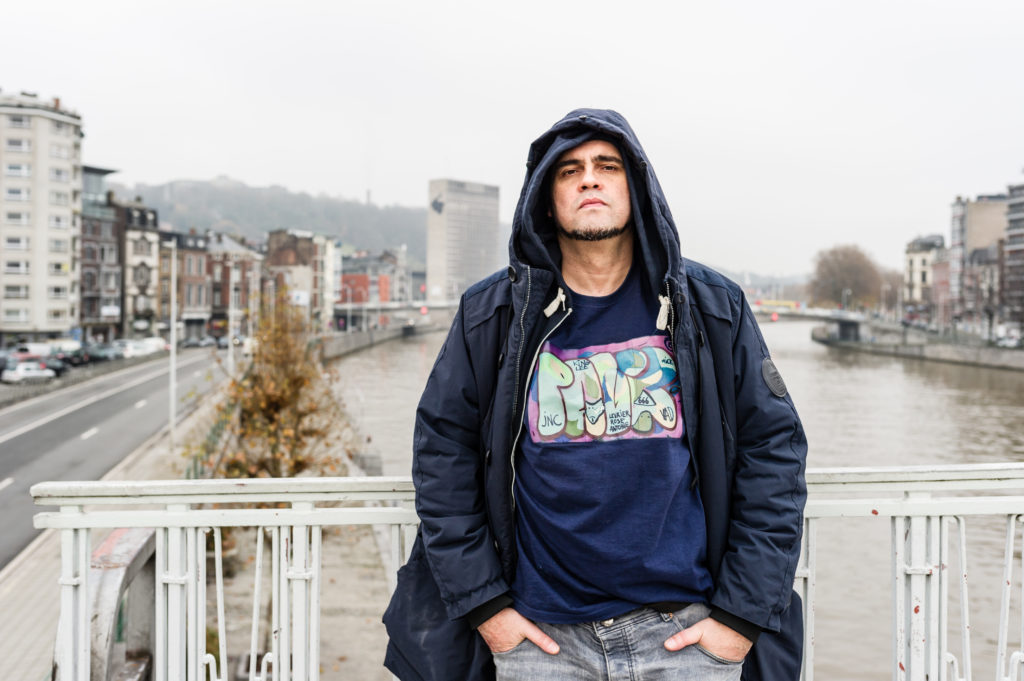 You are highly active on the Liège scene, literally and figuratively. Could you quickly draw your portrait and tell us what drives you?
I was born in Liège in 1972. I went to the Conservatoire Royal d’Art dramatique (lit. Royal Conservatory of Dramatic Art – now called ESACT) and I graduated as an actor in 1993.
I worked a lot during the two first years and rapidly got bored with this job, essentially because of its “mercenary” side. Then I headed for rap music, solo and with the group Starflam.

I’ve been working as a trainer-animator at the Teaching and Continuing Education League, where I have been in charge of the continuing education part for the Liège regional branch for the last six years. Now, I try to work on the cultural redevelopment of the working-class. My goal is to give a means of expression to the people who don’t necessarily have the cultural means to express themselves. This brings us to work with different population groups such as soccer fans, migrants, drug addicts, and so on.

How did the show project “Les Sans” come to be?
I got to know about the occupation of undocumented people thanks to the animator of Le Monde des Possibles, a centre that organizes trainings in French as a foreign language and informatics, in the spirit of community education. This animator, Didier Van der Meeren, wanted me absolutely to meet these undocumented within the framework of a show I was producing about that very same association. So I interviewed these people and discovered that they had founded their own association, La Voix des Sans-Papiers (lit. The Voice of the Undocumented) and were organizing themselves in a number of workshops for their members about writing, painting, audio-visual, gardening workshops, and so on. I met the animator of the writing workshop, Liliane Fanello, and I suggested her to do something with their texts. For La langue française en fête (lit. Celebrate French language) we adapted the undocumented’s testimonies to the stage and presented a first version of the show, which was 30 minute long. Immediately after this first performance, we received requests for revivals.
The show Les Sans was born!

Why is this show important to you?
It is important to me because I’m a quadroon myself. My father, who I never knew, was mixed-race. When I was a child, my company found out that and they started calling me “the white nigger”, because, indeed, I’m a very white guy. So, I faced racism since I was very young, and that’s something you can never forget. Nevertheless, that is what enabled me to build myself [as a person].
So it is very important to me that we try to understand the people even from very different cultures.

What are your projects today? Did this experience make you change?
With “Les Sans”, I have already made two shows with immigrants. The first one was made only with women and it was entitled “Nous sommes tous japonais” (lit. We are all Japanese – masculine form). This title may be surprising because there were only women and no Japanese. But it was [performed] at the time of Fukushima [when] it seemed that such a kind of risk [actually] existed for everyone. The second one, entitled “Zeus Xenios”, with reference to the police raid in Athens that led to the expulsion of 5,000 immigrants. That one was a cynical choice for a police operation’s name, because in Greek mythology Zeus Xenios is the god of hospitality.

I worked with migrants from Russia, Georgia and Irak and with young actors who had just graduated at the Conservatory of Liège. What I have learnt from “Les Sans” experience is, first of all, [that I felt such] pride seeing all those people, who had never been into a theatre before, going and bringing their voice on stage. They told their stories, also about their occupation for the past two years, about their resistance... But when we played in front of a Belgian audience, if a show can be able to sensitize to a problem, [we notice that] the people from public could never put themselves in migrants’ shoes. Therefore, in a future project, I will rather focus on trying to create a common work. I will try to connect undocumented’ problems to workers’ problem by trying to make their fights converge.