'The Animals',
according to
Strefa WolnoSłowa 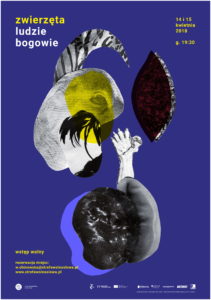 On January 2018, the Strefa WolnoSłowa artistic group started working on 'The Animals', which will be staged at Powszechny Theater on 14th and 15th April. The performance will then be presented in autumn in different locations of Warsaw, such as theaters as well as cultural centres, in collaboration with schools and youth centres. In the work, five actors and dancers are involved, both professional and amateurs, who had previously participated in the intercultural workshops conducted by the Strefa WolnoSłowa group.

The dramaturgy of 'The Animals' is based on the two-month improvisation and theater work inspired by "From animals into Gods. A brief History Of Human Kind", the non-fiction book written by Yuval Noah Harari.
A number of human species used to live on Earth. Until our times, only homo sapiens has survived. After eradicating all the sister species, despite the lack of any physical advantage, they subjugated the world of the other living beings, which were divided into those who deserved to live, those who should live with dignity, and those whose existence would not be tolerated. Homo sapiens set the rules of survival, invented the principles governing the order of things.

FROM THE SHOW'S PRESENTATION: A body is lying on the beach. Seems human but isn’t. Seems animal but isn’t. The body is moving, making sounds. We’re trying to establish communication, using language, gestures, sounds, stories. We’re trying to tame it, make it human. Right, but what does it mean to be human? We go back to the source – there used to be several human species on Earth. How did it happen that only Homo sapiens has survived? How and why did Homo sapiens annihilate all the sister species and subjugate the world of other living beings?


From the premiere - Pictures by Marta Ankiersztejn

Alicja Borkowska, together with the artists collaborating with Strefa WolnoSłowa, has been making and directing performances with the participation of migrants, refugees and asylum seekers in Warsaw for six years now, inspired by their true stories.
According to Alicja, “the activities produced by Strefa WolnoSłowa always create safe spaces where the abilities, talents and stories of everybody – no matter their gender, age, religion and culture – are treated as creative resources and treasures for the artistic process. These artistic spaces have become each time more political, as a safe environment in which to fight for the participants’ basic rights. I can see that a few years ago our workshops and performances were more popular – participants had different political views and their opinions about foreigners were often shaped during our artistic work, which had a huge educational role. Nowadays, it is always more visible that the majority of Polish people gets their knowledge about refugees and migrants from the media and internet, which often create fake news and are used for propaganda purposes by the state. Making theater with refugees within the Polish context is everyday more a matter of resistance“.

Performance
Presented for the first time in Bologna in the framework of Atlas of Transitions Biennial 'HOME', Cantieri Meticci's new production halfway between performance and installation 'The Nigger of the Narcissus' comes once more to San Martino Theatre. Another opportunity to get on the Narcissus' boat and immerse in a maze of visions, bodies, and relationships.
Read more
20191020

Workshop
Between 2019 and 2020 Strefa Wolnosłowa is conducting a series of intercultural moving groups for young artists willing to experience participatory and community arts in three Warsaw locations - Stół Powszechny, the Centre for Contemporary Art and the Curie City Artivism Gallery.
Read more