From the first week of the ‘100 pas presque’ workshop, led by Taoufiq Izeddiou and Said Ait El Moumen, 7-12 April 2018.
A reportage by Claudia Selmi

In the early group, we are about thirty people, welcomed by the beautiful San Martino theatre. You cross a courtyard full of light, where the space muffles the noise from outside, and then walk the staircase up to the second floor. The workshop starts with Taoufiq and Said introducing themselves. Both choreographers of Berber origin, they have long worked on contemporary dance with a very interesting approach – existential – by investigating their life experiences, their own and collective paths, present and past. They both share an explosive energy, which seems pliable as it is woven from the movements of their feet on the floor up to the sky. Taoufiq speaks French and Arab while Said translates Taoufiq’s words into Italian and English. The performance we are about to work on, ‘100 pas presque’, has already taken place in various cities of the world, first of all in Marrakesh. It is a hundred-step walk, or so, which will run for about an hour during the Atlas of Transitions’ festival, ‘Right to the city’, in June.

This is the first part of the workshop. There will be a second one just before the final performance on 23rd and 24th June, which will happen in two open-air public spaces in Bologna. From a common start line, we will move straight ahead up to the musicians on the other side of the performing space, who will be playing traditional music from Morocco. 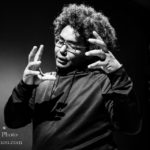 The rule is that we should move all together, as strong individuals within a strong community.
Taoufiq’s research questions concern matters such as, ‘How can we not disappear within a mass of people? How can we be within a community of connected people? How can we avoid turning ourselves into solitary knights, which would represent a trap? How a meaningful revolution can be made within society? What does being meaningful mean? Alone, you cannot produce a revolution.

Each of us employs specific qualities, attributes, movements, to make such a walk. You start slowly, and while accumulating energy and body tension, you speed up your movements until we will all decide that the time to go, to explode, has come. It is not a matter of words, you need to feel it, and then go. At that point you can release all you got during the performance and free yourself, dance together with the others, and involve in your body movement all the people who want to be part of it, who have perhaps only watched until that very moment.

As guides for our journey, Taoufiq and Said suggest that it is important to have roots in the ground, although we can dance in the air as well. It is important to connect and relate to each other, to let a simple movement spreads around. Why to keep all this energy inside? Why do not let ourselves to be free?
During the workshop, we have practiced exercises to become familiar with our own and others’ qualities. One day, I was testing some steps from past dances, which emerged from my body’s memory, when the choreographers came to each of us refining our movements… Taoufiq picked the first step I performed, he moved through it as pure energy and gave it back to me as precise gestures. His arms drew lines, and he said to me that I needed to give a soul to that movement – which was not meant to just fill the space around. I needed to question it, since movement has to say, narrate, something.

We made exercises to develop the 360 degree view that would allow us to relate to others’ movements during the walk, and to orient ourselves while keeping an eye on the group’s energy, and the time and space surrounding us. We made an experience together by walking with closed eyes across the city centre, along a partner, to immerse ourselves in the perception of the feelings emerging from such a path, from the urban space, and to feel how a group of people moving across the city inevitably changes others’ movement. Without sight, I entered an inner land and listened to muscles’ and joints’ movement. When we opened the eyes… where did we think we so surely were?

One of Taoufiq’s observations that struck me came after a rehearsal. He said that we gave too much attention to choreography, that choreography must vanish and turn into connections and energy.
Many thoughts about yourself can come from a workshop about movement and dance exploration. In my case, the walk, ‘100 pas presque’, has already been meaningful. Now, while moving on, I calibrate the weight I put in each step, to make it safe and rooted in the ground… sometimes, what the heaviness! Air is dense, suddenly impenetrable, and I have to fight step by step in order to make my path.

If I forget that this is a struggle, I can finally connect myself to the others, and this is the best way to walk. Connections. I cannot control everything, I cannot avoid energy infecting me and I cannot isolate myself from the others, lucky me! Why should I carry on? It is no fun playing the solitary knight role. I have realised that, while we dance, we need to find ‘breaches’ around us, a common intent, so that we can connect…

Good food for thought came from Said’s work… about the power that the look has, about the importance of holding someone’s gaze and the freedom and necessity of body movement. With that way of behaving Said has, between gravity and paradox, once he said: ‘If you feel the need to break that wall while you dance, you can do it! If you feel the imminent need to break the rules and to go and dance with someone on the other side of the line delimiting the performing space, you can do it! You are free, nothing is determined’.

In the wait for the second part of the ‘100 pas presque’ workshop and its final performance, this has been my precious experience of hearing and exchanging points of view, through which we have questioned our community and common space, our relationships and duty to connect to the others by the means of dance. A good way of thinking about all this is to ask yourself: How do we walk across our community?