'Lawrence of Arabia' is a very old movie, forgotten by many, in which a British officer finds himself in the desert of Arabia, outside of his culture, and experiences a conflict of loyalty between Great Britain and his brothers in arms from the desert tribes. Why this reference, since the title showed up already before the start of rehearsals?
Our 'Lawrence of Arabia' does not have anything in common with this film or this story. The reference came up at a very early stage of planning with Pawel Sztarbowski. I thought that Lawrence could be a good inspiration for a conversation about cultural misunderstandings and the colonial gaze in a melodramatic and amusing way. It all happened before we started working, before we formed a group of international collaborators. The titled stayed, but it changed its sense, since we understand it as referring to a wrestling with identity. It could have been Janusz from the British Isles' as well, or any other metaphor connoting ambiguity in relation to identity.

I’d like to discuss identity with you, but let’s return for a moment to the workshop group. I remember that we began working on your performance by searching for migrants and refugees in Poland and - as we know from the show - this was not entirely successful. Who signed up and what did this mean for the creative process in your work?
I get the impression that this project is a story about the clashing of imagination with reality and about following reality rather than fantasies. Working with the workshop group was essential to this process. When I was invited to direct a show as part of Atlas of Transitions, I was sure that we could not speak about migrants as white Poles without their participation. Of course, at first, we were thinking about migrants, not the recent wave, because they are not here - only some of them. Here, there were some unexpected events and, in the end, among the many interesting proposals, almost nobody qualified. This was a decisive moment, as it represented a true confrontation with reality. And then we, as the group working out the idea behind the play - Piotr Wawer, Agata Maszkiewicz, Danielo Malona and I - decided to adapt the planning to reality and not to push through our ideas. Agata said it this way: we were supposed to work with refugees, there are instead immigrants in the show - anyway, they will be acting with Polish actors. And this was our starting point.

Real refugees did not come, so the show features them as 'ideal refugees', according to our stereotypical fantasies about them. Those we expected did not show up, but real people came in their place. People who decided to work with us are immigrants, foreigners, most of them have been living in Poland for many years and they are very strongly rooted here. Finally thus, the actors - Maria Robaszkiewicz, Natalia Łągiewczyk, Wiktor Loga-Skarczewski, Karina Seweryn - started working on this material and adding their observations, stories, and attitudes. We worked at the intersection of stereotype and fantasy with real problems and expectations, as well as the limitations of the theatrical medium. 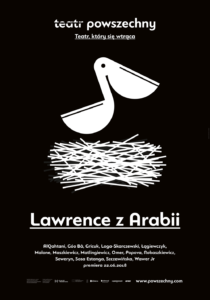 Yes, a project on migrations, with a group of predominantly white actors from a large theatre in Warsaw acting out the stories of people who have quite comfortable lives - a colonial fantasy, right? Do you believe that theatre - despite its limitations - can actually enter into social and political activity, without reviving colonial strategies?
Big question… (laughter) Theatre should certainly try. I think our cast can be described as having one black actor and five non-black actors, since a large part of the show relies on the participation and work of Mamadu Goo Ba. There are no clear guidelines, but I believe that after the so-called 'confrontation with reality' our show went in the direction of having 'low ambitions'. Theatrical work that deals with important questions does not necessarily have to aspire to a total description of reality. Our work is meaningful when we focus on specific issues rather than abstract or ideal visions. Lately, I have been interested in how these initial intellectual assumptions fall down in confrontation with reality. While working with the workshop group I was less interested, this time, in colonial fantasies.  I was struck by our difficulty with the intercultural communication caused by our belief, since we live in a very homogeneous country, although many foreigners live here. It seems that in intercultural conversations we start to feel uncomfortable - either radically familiar or radically foreign. During the rehearsals we realized how little we know about other cultures. What can we say about Canada or Sudan, for instance? This reveals the landscape we are plunged in which obscures most of what is beyond our immediate concerns. I think that with such kinds of project, honesty is necessary. The spectators should see some of the backstage of the theatre, its inherent limitations.

Where did you notice problems with stereotyping and cultural identity?
The very attempt to perform cultural or national identity is a trap. Can we imagine someone from a different culture and not to revive stereotypes? What does it mean to represent their country? If someone has lived in Poland for twenty years, he doesn’t need to explain what life in Poland is like.

Have you experienced moments of cultural clash and stereotyping in your work?
I have had fewer work experiences in international contexts than I wish. However, those I have had, were extremely thought-provoking. The first was working in a Slovenian theatre - I really like this country and I tend to idealize it. I worked with great people, but while interacting with the press I realized that I was perceived as someone coming from a more authoritarian country. The journalists were very interested in my views on the political situation in Poland and one journalist said, 'Great. We have your opinion, and the opinion of a girl from Iran'. I suddenly felt that I was considered as belonging to a country like Iran, rather than Slovenia. I had a very interesting experience working with a European modern dance project such as ‘Identity, Move!’. The participants were countries that joined the European Union at a later stage. It was fascinating, but we had difficult moments of miscommunication when, despite the assumption of full equality, our mutual cultural stereotypes exploded for insignificant reasons. I also took part in workshops led by someone from 'far-Western' Europe. Although he was a fantastic person, he  demonstrated to have a rather colonial approach. He explained basic matters about the political nature of art and was extremely surprised that we had also read Jacques Rancière. I get the impression that, in interpersonal communication, such things are the most interesting when they happen accidentally. This awkwardness, which happens when we have to face unresolved issues,is what interests me the most in theatre.

In your earlier productions you devoted much time to dealing with social memory and Polish trauma. In 'Lawrence of Arabia' I sense that the perspective of 'the other’ becomes the mirror of those efforts, allowing you to view those issues from a different angle. How do you communicate with the audience now?
That’s a good way of putting it, since, in reality, I left that part of Polish culture, which was very important to me to deal with. I realized, though, that, at some point, this process of working through and questioning reaches an end, and becomes 'trapped' in the same problems and discourses. Thankfully, I work with a team of talented artists. Piotr Wawer Jr. always makes sure our work is progressing, when it falls into beaten tracks. Stage designer Daniel Malone is a New Zealander who lived in Poland for a long time and then moved to Berlin, and choreographer Agata Maszkiewicz, a Pole living and working in France, both amaze me with their inventiveness, as they are not tied to one single culture.  Their remarks are illuminating to me, as they force me to reflect on my limitations. Going back to memory and Polish culture...  it was important to me to cooperate with the Polish Theatre in Bydgoszcz, where we studied new universalism and tried to go beyond provincial mentality. Now a new significant setting for my work is Powszechny Theatre, which strives to become an international and democratic institution. Working in these two places has transformed my thinking. From the beginning of this theatrical season I have tried to look at what we call ‘familiar’ from different perspectives, for instance in the cases of 'War of the Worlds' in Sosnowiec and 'Brilliant Friend' in Wroclaw. Here, 'Lawrence of Arabia' is an attempt to face the way the ‘others’ are portrayed in theatre, which, despite best intentions, results in paternalism, since they often refer to abstractions. For this reason, we decided to confront with reality, and this led us to strange and even silly landscapes - but you have to start somewhere...