The state of weightlessness of migrant caregivers in Italy

The suspended world of Samantha Cristoforetti and the burden to bear of an elderly care giver, far away from her home country. Weight and the absence of gravity, the two faces of the same coin that Estonian artist Kristina Norman is trying to fathom with her new docu-performance 'Lighter Than Woman', presented for the first time in July 2019 at Santarcangelo Festival. What follows from talking about feminine emancipation in Italy? And how do “badanti” - socially invisible figures – appear in an Italian contest? In an interview published on Artribune, Alessandra Corsini met the artist, who explored and filmed this feminine universe during a creative residency in Santarcangelo and Bologna in the frame of Atlas of Transitions Biennial 'HOME'. 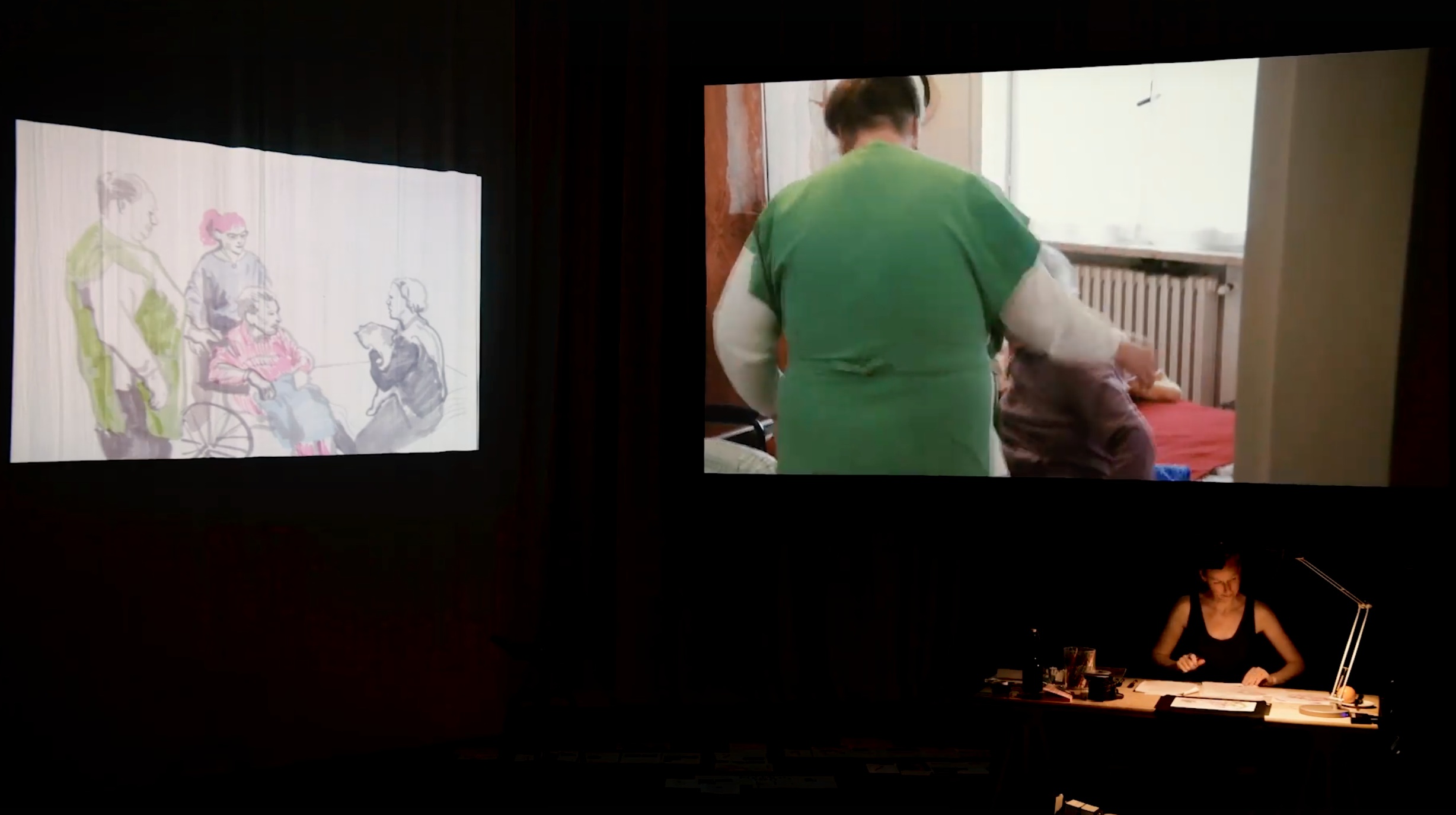 ‘Lighter Than Woman’ is the title of the performance. What are the elements that brought your work to identify itself with these words?

It might seem absurd, but this work talks about the ‘badanti’ and Samantha Cristoforetti, the first female astronaut. The juxtaposition was actually born of a paradox. It is fascinating to see how immigrant women accept the responsibility of elderly persons, sometimes having to literally lift others’ bodies, precluding the possibility to take care of their own families. In this sense I believe that the phenomenon of ‘badanti’ is incredibly poetic. The lack of gravity of an Italian woman who migrates to another physical condition came almost spontaneously to mind. Although the stories are all different from each other, there is a common thread. Therefore, ‘Lighter Than Woman’ deals with gravity and is an attempt to defeat it.

In the performance, which took shape during your creative residency in Santarcangelo and Bologna, women from diverse backgrounds are the protagonists. Why did you choose to explore the feminine universe, in particular by filming badanti, women poets, in their work environment?

I was curious to observe how women would mainly fill this type of work. The badante has a mission: to save her family from poverty. She migrates from her country to a foreign land like an astronaut, whose life purpose is to migrate into space to reach weightlessness. A badante leaves her home, her loved ones, her career, her life, finding herself in the same state of uncertainty as the one of a cosmonaut, caught in the middle, unavoidably facing the feeling of not belonging anywhere and perceiving the typical emotional condition of the migrant. In Bologna and Santarcangelo I met with a community of badanti, mostly immigrant women coming from countries emerging from the remains of the Soviet Union, who were familiar to me as I myself was born in Estonia when it still belonged to that reality. Later on, I deepened a study in which Italy turned out to be one of the most emancipated societies. Then everything became clear to me: badanti little by little grew into a by-product of feminine emancipation, taking a role, which belonged to Italian women before. At the end of my research, the situation seemed much more complex to me.

You have always explored the political potential of art whenever it deals with current issues, from human rights to historical memory. What are the conclusions you have drawn following the research you conducted with ‘Lighter Than Woman’?

In both Europe and Italy society is becoming more and more conservative, strongly opposing to immigration, and clinging to the traditional family model. Paradoxes such as these are at the heart of our times. In fact, if you look at statistics, in more than two million Italian families there is an immigrant woman. During my research in the households I visited, it was always a woman from an Ex-socialist country to assume the role of janitor of family traditions, starting from taking care of the elderly, to cooking, knitting and embroidering. 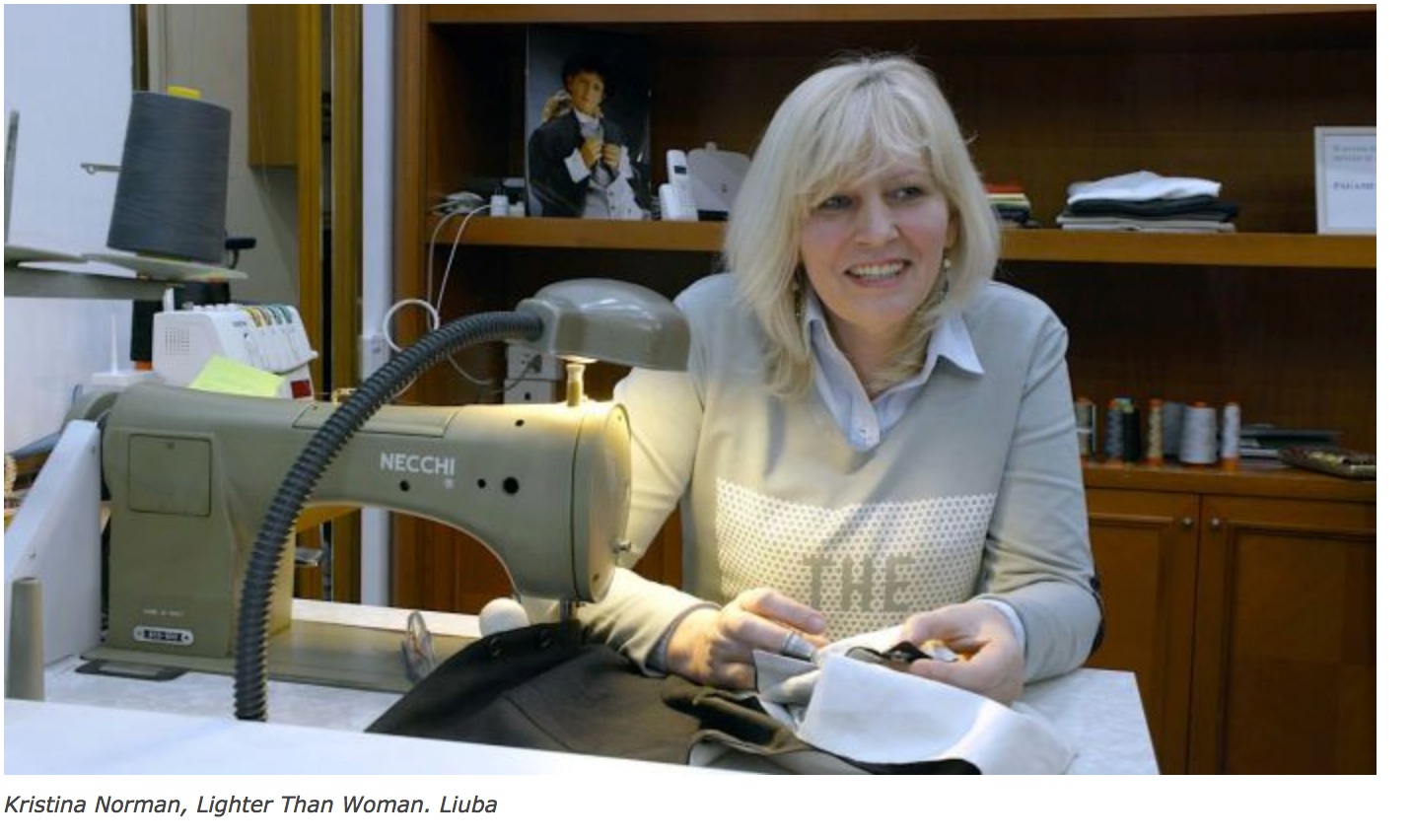 What do you think about the diverse feminist movements?

I am new to the feminist theory, I feel connected mainly through a sense of social justice. In my first artistic works, I conducted research on nationalism from a constructivist point of view. As Judith Butler states, each human being is subject to change. The way in which a person wants to be seen or the position taken within society is always linked to performativity. Essentialism is something I don’t agree with. According to this theory, women intrinsically love taking care of their families and households. A theory, which is used in a clear and cunning way by the capitalist system to channel resources someplace else. Gender essentialism is first of all a way to exploit women.

What does it mean to be a woman today? How did the concept of emancipation change?

It depends on the points of view. Looking at the West from the East is one way. Looking at the East from the West is another. Looking downwards from the Earth’s orbit is different again. For me weightlessness is the main theme of our times. Several of us experience the condition of the badanti: being in the grey area of life, not quite sure about the future, when our workplaces become our homes and our homes become our workplaces. It is a fragile existence. The social system’s lack of gravity seems to be the new human condition. It is hard to avoid, especially for a woman. Metaphorically, the only one who can do it is Samantha Cristoforetti. An icon of emancipation for Italian women, who, with her sway, at the top of her career, can only give more hope.

Interview by Alessandra Corsini, published on July 5th 2019 on Artribune.
Translated from Italian by Konstancja Dunin-Wasowicz