Under the umbrella of the Atlas of Transitions project, Backa Theater and Twisted Feet have started realizing a dance show with young people and amateurs. A project dedicated to mirroring, reflecting on and celebrating encounters, courage and hope in the wake of policy measures on migration, displacement and harsher asylum laws.

A narration of the first workshop
At Schillerska secondary school, the P.E. hall looks a bit funny, with its winding white pillars crowned with Greek capitals, almost as if a daydreaming architect combined a tennis court with an art museum by accident. It smells of gymnastics plinths and a hint of old books. In this place, almost twenty young people aged between 16 and 18 have gathered in May on 24th Thursday morning to attend an inspiration workshop with Twisted Feet, arranged in a fresh collaboration between the dance company and Backa Theater. 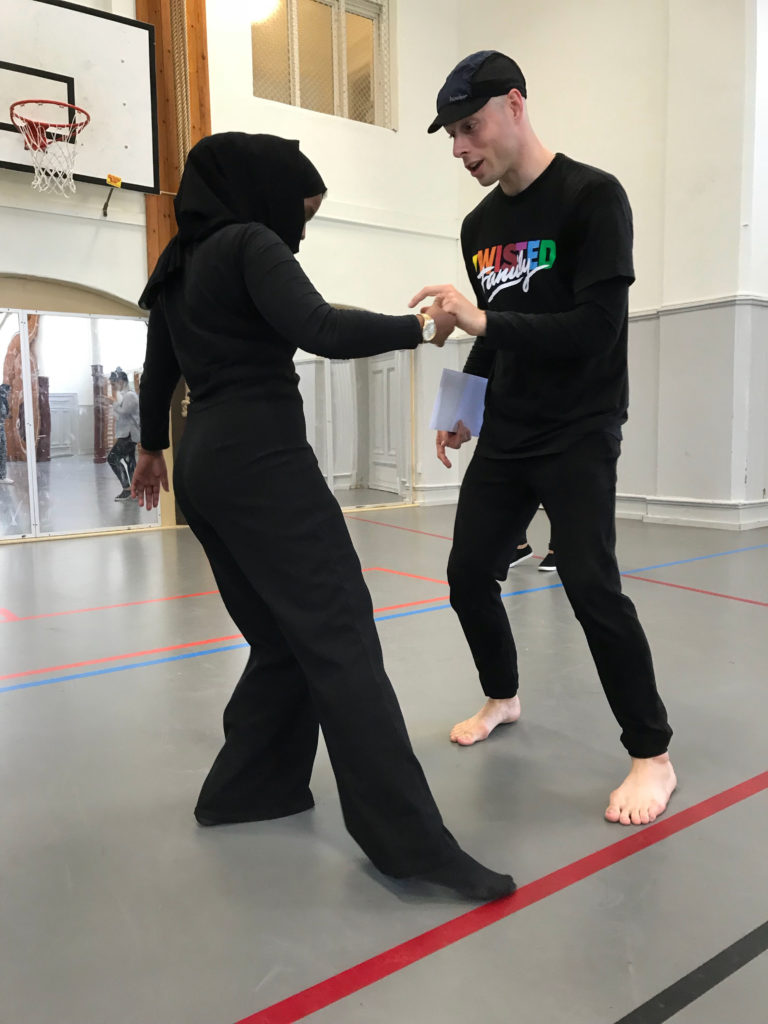 Some of the students can follow the steps of Denny Hultén with precision. Others weave with an arm when it's the leg that’s supposed to move, or headbump straight into a buddy's back. It's a lot of laughs. The Chromeo hit, ‘Needy girl’, roars from the stereo and the volume panel that is mounted to the wall to warn for loud sounds blinks in a pale yellow and angry red to the beat of the music.
"We'll do a somersault", Denny calls out.
Someone manages to call "No!", then the whole group falls into pieces, each and every one with his or her very own direction.

"The somersaults were the most difficult thing”, admits the 17-year-old Sumittra Tanphonkrang when the 90-minute pass is over. She gets the support of friends Vanessa Billton  - who also found the mechanical ‘popping moves’ a bit tricky - and Ann Katrin Johansson, 17 and 18, respectively. "When everyone heads off in all different directions it's easy to collapse", says Vanessa Billton. “But it was a delightful mood. Everyone tried as well as they could, and the teacher was very relaxed and good… so, it didn’t not get too pretentious”.

“Instead of doing the usual way and interviewing a number of people who have been involved in different things, then create a performance based on it, we talked with Twisted Feet, where youngsters come by themselves. There is a particular joy in the dance, and we hope to do something that relates both power and existential feelings with movement rather than by explicitly saying everything out loud", says Mattias Andersson. "The arts and not least dance are universal. Dance communicates across national borders, no matter what background you have. It enables us as artists to find collaborations and common places to meet.”

Neither Ann-Katrin, Sumittra nor Vanessa knew that the workshop was part of a theater project. "We came just because we thought dance is so fun. I wish we could do more things like this”, Ann-Katrin says. When asked, “Would you like to be in the show?”, she laughs.  “Sure, why not? It depends on what they're planning to do.”

THE WORKSHOP is the first in a series of similar activities that Backa Teater and Twisted Feet arranged for young people between 13 and 18 years of age throughout the year. In February 2019, it will result in a joint production, directed by the artistic director Mattias Andersson and choreographed by Denny Hultén, and the premiere will be in Gothenburg.

Performance
Presented for the first time in Bologna in the framework of Atlas of Transitions Biennial 'HOME', Cantieri Meticci's new production halfway between performance and installation 'The Nigger of the Narcissus' comes once more to San Martino Theatre. Another opportunity to get on the Narcissus' boat and immerse in a maze of visions, bodies, and relationships.
Read more
20191020

Workshop
Between 2019 and 2020 Strefa Wolnosłowa is conducting a series of intercultural moving groups for young artists willing to experience participatory and community arts in three Warsaw locations - Stół Powszechny, the Centre for Contemporary Art and the Curie City Artivism Gallery.
Read more