In Spring 2018 a call for papers has been announced inviting practitioners, professionals, academics and scholars to submit essays about the function of the arts in redefining the phenomenon of migration, investigating themes such as artistic performance, theatre for development and social change, working practices in multicultural productions, and not only. In its endeavours, Atlas of Transitions seeks to create intercultural meeting spaces for people with diverse cultural backgrounds and to encourage the circulation of ideas across the globe.

'Psychogeographies of Lampedusa: Race and gender in exploration' is the contribution submitted by Dr. Karina Horsti, an Academy of Finland Research Fellow at the Department of Social Sciences and Philosophy of the University of Jyväskylä, Finland. Her current research examines remembering of forced migration in cultural productions in Europe. She is currently writing a book about the Afterlife of the 3 October 2013 migrant disaster in Lampedusa. Horsti’s research interests focus on qualitative and critical studies on media and culture in the contexts of migration, cultural diversity, and humanitarian action. 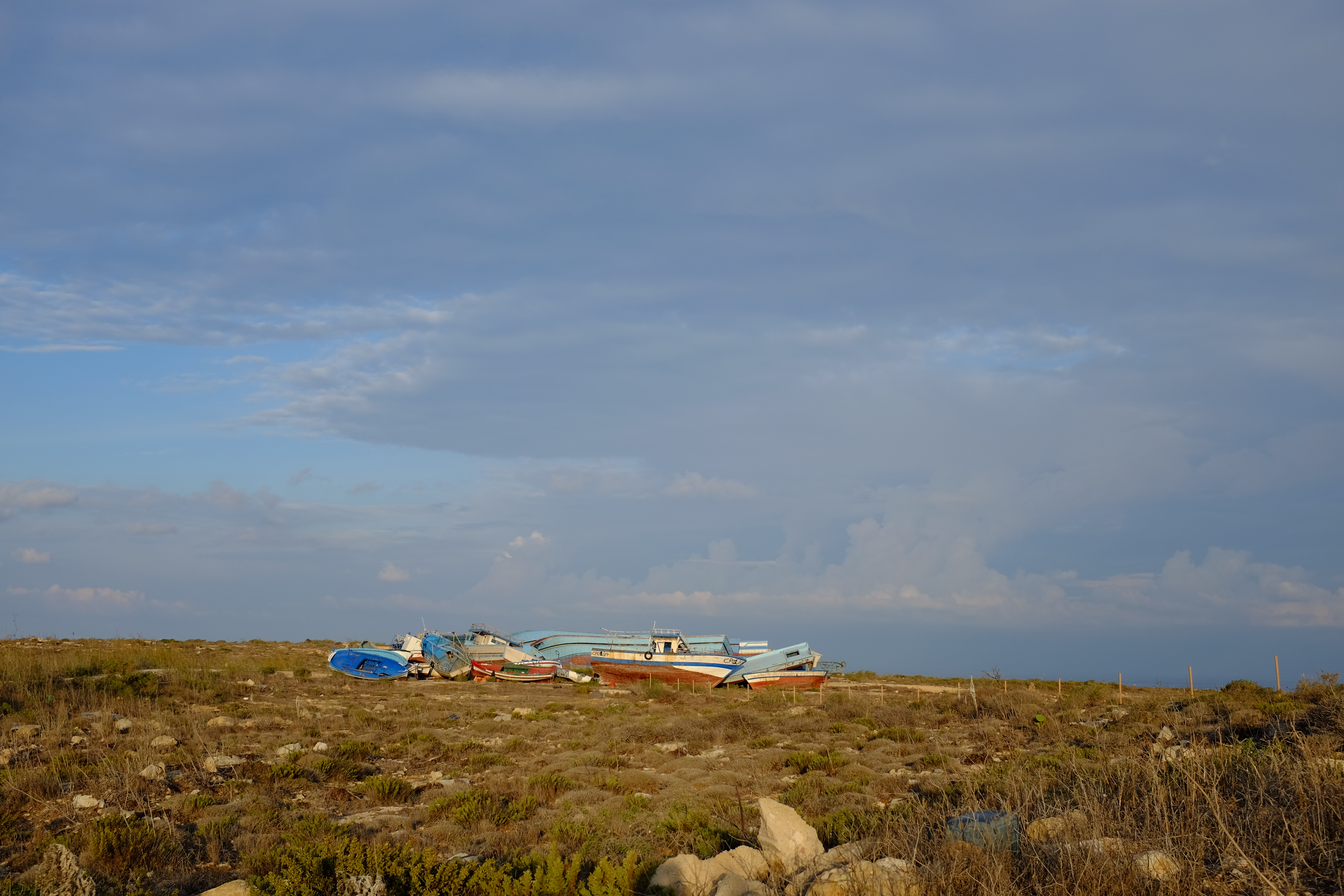 Psychogeographies of Lampedusa: Race and gender in exploration

The gate is unlocked and I cannot resist entering this fenced area designated with signs 'Zona militare – Sorveglianza armata'. Next to the unguarded check - point I hear a humming noise high above me, coming from a radar tower. The gate offers an opening to Loran – a former U.S. Coast Guard and NATO base on the island of Lampedusa, Italy. The Italian Ministry of Interior operated the now abandoned two - story building as a reception center for asylum seekers and refugees in 2011, during a period that the Italian government called 'the emergency of North Africa'. Near the base, there is a road leading to cliffs, which oversees the Mediterranean. It is there I see ruins of boats made of wood or rubber. They are same boats used by migrants to cross the Canal of Sicily to Italy. It suddenly occurs to me. How will I explain my presence if the Italian military appears? I am a Finnish woman alone with a camera in a space reserved for military personnel. If this happens, I decide I will act the role of an unknowing tourist looking for the beach. My worries dissipate as I begin moving around the huge boats to examine the objects left behind during rescue operations. These include empty plastic water bottles, engine motors, piles of dry clothes stiffened by sea salt, shoes, life vests, the remaining part of a cell phone, a woman’s bra, a doll, a flash light, and a child’s inflatable vest – still full of air, perhaps breath of a caring parent. In 2014 when I first visited Loran the abandoned building had no door. But in 2017 the buildings had been fenced to keep curious explorers away. In 2011, the run down former NATO base buildings had been used as a center for undocumented migrants. The wind now blows through broken windows.

In 2014 I was able to enter the building and I recall the feeling of vulnerability. What if someone was inside? What if the military men had followed me there? The white privilege that helped me pass as a lost tourist might not keep me safe inside. My white female body allowed me to make the first entrance to this forbidden area but not the second one. What scared me about entering the building, paradoxically, was the knowledge that no - one could see me in case I was in danger. A phenomenological approach to places – what Guy Debord (1955/2006) termed psychogeography – directs attention to these types of self-observations, to the examination of emotions and behavior related to being in places. Urban exploration – Urbex – revolves around experiencing urban areas in an alternative and critical way. It is about 'hacking' places and seeing marginalized spaces in ways that transgress the everyday vision of urban areas (Bennett, 2011; Mott & Roberts, 2014). However, most of the literature and practice of Urbex ignore the analysis of race and gender. Part of the Urbex culture is about 'having the balls' to enter the most dangerous and difficult spaces, thus making it a celebration of masculinity (Mott & Roberts, 2014).

The racialized politics of exploration was a topic I later discussed with Hamburg based Finnish artist HMJokinen and Nigerian migrant activist Asuquo Udo who had explored Loran together. They feared of being seen already before the gate on the road that leads to the former NATO base. Asuquo Udo’s migration status was unstable at the time in 2014, and they knew that his race and ethnicity might lead the military to ask questions about his permits. As a black refugee he embodies the border, particularly in this part of the Mediterranean, which has been constructed as a borderized zone. Asuquo Udo had arrived to Lampedusa on a boat in 2011 escaping the civil war and NATO bombings in Libya and was hold in the main center in the middle of the island. Now returning to Lampedusa – as he put it - 'as a free man' – he wanted to visit the place where other migrants were held at the same time. When he returned to Lampedusa he was one of the leaders of Lampedusa in Hamburg movement in Germany, a refugee protest for human rights of migrants that objects restrictions to intra-European mobility. He would not be able to pass as an innocent tourist and the cost of being caught trespassing a military zone could be high for him. It is interesting how the categories of race and ethnicity shaped HMJokinen’s and Udo’s experience of the two spaces – the outside space with the boats and the inside space of the abandoned military base – in ways that were different from my own experience. They felt more protected inside the building where the military could not see them.

Different histories and border politics merge in this site. Loran is a relic of the Cold War era as the logos dating back to the American presence remind us. Photographs of migrants participating in humanitarian events and x-rays lay in the rubbles on the floor. These remains of institutionalized care signify the construction of a border where the logics of humanitarianism and securitization fuse. Walking from room to room inside the building and seeing the signs of confinement and rescue make me think of the present and future significance of this place. This can be an alternative memorial site that witnesses the production of the border and its human cost. It is also a site for alternative dark tourism. All these interpretations contest the conventional notion that the place would only be an unfunctional dumpsite (Edensor, 2005: 5). However, the gendered and racialized politics of exploration that our visits to Loran triggered made me think about further questions.

What is the significance of these types of ruined sites and abandoned objects where the production of the European border and migration politics materialize? What would such places mean for future generations of Europeans seeking their pasts? What is the story of Loran and of the discarded objects that have been left there? Are they (the objects) left for the descendants of those who experienced the borderized zone or for the citizens of the nations that created it?

Bennett, Luke (2011) Bunkerology: a case study in the theory and practice of urban exploration.

An earlier version of this essay appeared in Re-configuring Ruins, edited by Dr. Carlos Lopez-Galviz.