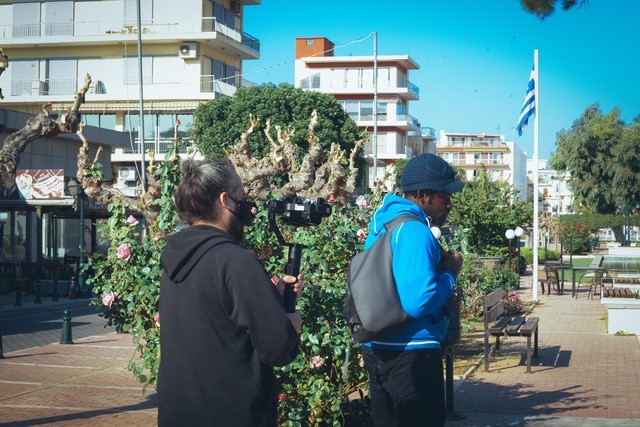 In the midst of the Covid-19 pandemic’s second wave, Motus Terrae is working on the finalization of the Monuments of Conflict & Convergence project. Due to the recurrent lockdowns and the continuous restrictions of the last period, the large scale, live performance’s production, originally conceived to take place in the public space of Lavrio, has been rendered impossible. Nevertheless, in an attempt to communicate the content of the whole endeavour, Motus Terrae’s team is preparing a short film, a simulation of shorts, through which the viewers will get to know the concept and the creative process and meet the local people involved in the project.

The first phase of Monuments of Conflict & Convergence project consisted of a series of meetings and working sessions with the participation of students of NTUA’s School of Architecture and local citizens. A large team of almost 30 people worked on researching specific neighbourhoods and places in Lavrio, by mapping, not the spaces as usual, but the people’s narrations on their migrant history. Then, during the second phase, Motus Terrae’s team, along with the University teachers, collaborated with the local group to imagine and give form to what could be called Lavrio’s contemporary monuments, reflecting the city’s current state regarding social issues and the way its people perceive them.

Stay tuned to discover how the site-specific creation would actually invest the city’s public space, if only things were a bit different…

Events like this
The docu-Film Monuments of Conflict & Convergence by Motus Terrae, has just been released. Discover more about Lavrio city identity, its history and people migration stories. Watch it here or visit Atlas of Transitions' YouTube channel.
read more
Imagine your vocal expression as a form of tuning into the initial notes of MAGNITUDO. The mosaic of moods, affections, emotional states translated into sound, an acoustic image capable of including everyone's voices. We are looking for you artistic act of resistance. Find out how to join us!
read more
Imagine a giant urban chorus. Imagine the energy of a common vibration coming from different directions of the city. Imagine being part of a temporary community aimed at the creation of an extraordinary public event. A new opportunity for singing and music enthusiasts is coming to Bologna! It's called "Magnitudo, a collective act of voicing", and workshops start in April 2020. Find out how to join!
read more
If you wish to take part in an interdisciplinary artistic undertaking and learn some Polish along the way (or improve your communication skills in this language), meet new people, and learn about new forms of expression through art, feel invited to participate in "EXILE WARSAW 2020", a new multicultural project by Strefa WolnoSłowa.
read more